Counting: How We Use Numbers to Decide What Matters (Paperback) 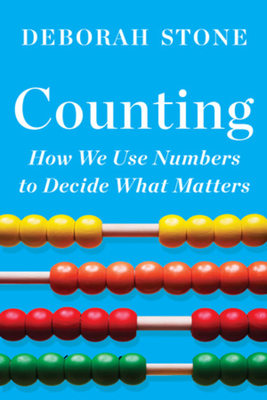 “Required reading for anyone who’s interested in the truth.” —Robert Reich

In a post-Trumpian world where COVID rates soar and Americans wage near–civil war about election results, Deborah Stone’s Counting promises to transform how we think about numbers. Contrary to what you learned in kindergarten, counting is more art than arithmetic. In fact, numbers are just as much creatures of the human imagination as poetry and painting; the simplest tally starts with judgments about what counts. In a nation whose Constitution originally counted a slave as three-fifths of a person and where algorithms disproportionately consign Black Americans to prison, it is now more important than ever to understand how numbers can be both weapons of the powerful and tools of resistance. With her “signature brilliance” (Robert Kuttner), eminent political scientist Deborah Stone delivers a “mild-altering” work (Jacob Hacker) that shows “how being in thrall to numbers is misguided and dangerous” (New York Times Book Review).

Deborah Stone is a renowned scholar who has taught at Brandeis, MIT, and other universities around the world. Her award-winning book Policy Paradox has captivated readers through three decades, four editions, and six translations—but who’s counting? She lives in Brookline, Massachusetts.