One Friday in April: A Story of Suicide and Survival (Hardcover) 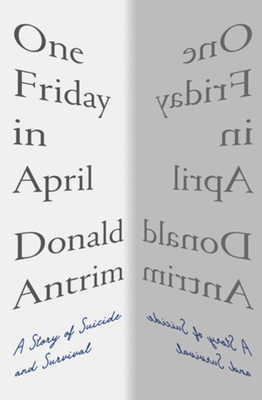 On that April Friday Antrim precariously, and literally, held on to life on a Brooklyn rooftop. His subsequent survival, which he recounts with unadorned honesty, has been a harsh struggle illuminated by bursts of hope. Antrim's story is ultimately a gift to those affected by compulsions to end it all. — Mike Hare

Named one of the Most Anticipated of Books of 2021 by the Los Angeles Times, Literary Hub, and The Millions

A searing and brave memoir that offers a new understanding of suicide as a distinct mental illness.

As the sun lowered in the sky one Friday afternoon in April 2006, acclaimed author Donald Antrim found himself on the roof of his Brooklyn apartment building, afraid for his life. In this moving memoir, Antrim vividly recounts what led him to the roof and what happened after he came back down: two hospitalizations, weeks of fruitless clinical trials, the terror of submitting to ECT—and the saving call from David Foster Wallace that convinced him to try it—as well as years of fitful recovery and setback.

One Friday in April reframes suicide—whether in thought or action—as an illness in its own right, a unique consequence of trauma and personal isolation, rather than the choice of a depressed person. A necessary companion to William Styron’s classic Darkness Visible, this profound, insightful work sheds light on the tragedy and mystery of suicide, offering solace that may save lives.

Donald Antrim is the author of three novels, including Elect Mr. Robinson for a Better World, and a memoir, The Afterlife. He has received awards from the MacArthur Foundation and the National Endowment for the Arts, among others. He lives in Brooklyn, New York.

One Friday in April evokes, as vividly as any book since William Styron's Darkness Visible, the ongoing present tenseness—or present tension—of suicide... [Antrim's intentions] are to explore the experience of his illness rather than its arc... It’s a deft and unexpected approach, diffusing narrative tension in favor of a more inchoate set of anxieties, which only expand the deeper we read. At the same time, this enables One Friday in April to move fluidly between recollection and reflection, between what happened and the questions it provokes.

Bracing... A heart-rending and edifying portrait of the pain of mental illness.
— Michael Mewshaw - Washington Post

[With] an unflinching portrait of his psychosis, hospitalization and treatment...Antrim aims not only to destigmatize mental illness but also to strip away the hushed-whispers mystery surrounding suicide.
— Sandra Sobeiraj Westfall - People Magazine

As a memoir, the book is superb, rich with all the details and vocabularies that comprise any de-mystification of illness.
— Patrick Nathan - Boston Globe

With exceptional clarity and tremendous self-compassion, Antrim methodically recounts the moments that led up to committing himself to a psychiatric hospital for several months and the harrowing experience of getting the help he needed to bring himself back from psychosis.
— Karolina Waclawiak - Buzzfeed

A work of solace for the many people who have encountered this fear or lived with its aftermath.
— The Millions

A profound, courageous, compassionate masterpiece that will, I think and I hope, change the way we think about suicide forever. What Antrim brings powerfully to bear in this inspiring and essential book is the great writer’s habits of precision and unwavering honesty. This book is an act of generosity; Antrim is trying to tell us something deeply true not just about the suicidal, but about all of us; about our culture, about the way we live, about how we might lead better, more authentic, more connected lives.
— George Saunders, author of Lincoln in the Bardo

In One Friday in April, Donald Antrim describes the sickness that is suicide and the anguish of self-annihilation in crisp, vivid prose that is free of self-pity or self-aggrandizement. The book chronicles his experience at the brink, but it also describes the larger face of how little we really know of suicide and its multiplicity of causes, and how little we understand of our agency over our own lives or deaths. It is a compelling, heart-breaking, and redemptive read and it shimmers in its narratives of both loss and hope.

— Andrew Solomon, author of Far From the Tree

Donald Antrim's memoir, bringing us close to the heart of the matter and giving us a new perspective, is a clear-eyed and unsentimental study of one of the most mysterious and misunderstood human experiences. It is what one expects from great art: life-sustaining and life-confirming.
— Yiyun Li, author of Where Reasons End

Donald Antrim has written an important, beautiful book, one that serves to let all of us to travel into the darkness and emerge with a deeper, more empathetic understanding of the nature of the suicide, the urge for self-nullification. Books like these are a gift, a tool, and might help save us from tragedy by opening up a door to painful truth... Suicide is a word that must be spoken—in clear terms, in loud voices—and seen in a clear, honest light; One Friday in April is an important new source of light.

This harrowing and beautiful account of coming close to suicide will be an instant classic. With his direct, ravishing description of his own illness, Antrim allows us to see inside the suicidal state of mind in a way no book has ever done. He repositions and redefines what suicide is and allows the reader to see and comprehend this extreme of human situations in an entirely new way.
— Katie Roiphe, author of The Power Notebooks

Unflinchingly honest... The narrative is defiantly nonlinear and brilliantly reflective of the author’s state of being: anxious, inert, unworthy. Unlike a flat line, Antrim’s talent for storytelling is more similar to Russian nesting dolls: moments within moments that build upon each other as recollections and revelations... Slim yet formidable, a mind-bendingly good read.
— Kirkus Reviews (starred review)

Lucid... The light at the end of this painfully eloquent tunnel is the conclusion that no one should venture through the darkness alone. Readers looking to better understand the nuances of mental illness would do well to start with this profoundly affecting account.
— Publishers Weekly