What Linnaeus Saw: A Scientist's Quest to Name Every Living Thing (Hardcover) 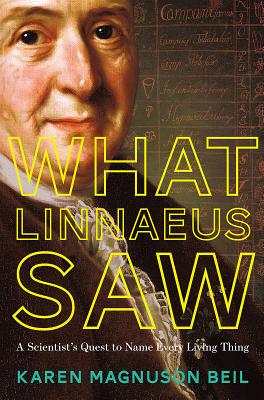 By Karen Magnuson Beil
$21.95
Click Title for IN STOCK Location

The globetrotting naturalists of the eighteenth century were the geeks of their day: innovators and explorers who lived at the intersection of science and commerce. Foremost among them was Carl Linnaeus, a radical thinker who revolutionized biology.

In What Linnaeus Saw, Karen Magnuson Beil chronicles Linnaeus’s life and career in readable, relatable prose. As a boy, Linnaeus hated school and had little interest in taking up the religious profession his family had chosen. Though he struggled through Latin and theology classes, Linnaeus was an avid student of the natural world and explored the school’s gardens and woods, transfixed by the properties of different plants. At twenty-five, on a solo expedition to the Scandinavian Mountains, Linnaeus documented and described dozens of new species. As a medical student in Holland, he moved among leading scientific thinkers and had access to the best collections of plants and animals in Europe. What Linnaeus found was a world with no consistent system for describing and naming living things—a situation he methodically set about changing. The Linnaean system for classifying plants and animals, developed and refined over the course of his life, is the foundation of modern scientific taxonomy, and inspired and guided generations of scientists.


What Linnaeus Saw is rich with biographical anecdotes—from his attempt to identify a mysterious animal given him by the king to successfully growing a rare and exotic banana plant in Amsterdam to debunking stories of dragons and phoenixes. Thoroughly researched and generously illustrated, it offers a vivid and insightful glimpse into the life of one of modern science’s founding thinkers.

Karen Magnuson Beil has worked as a news reporter and science writer. Her work takes her on exciting adventures—such as paddling through a marsh with a muskrat farmer and climbing a tower to “interview” New York’s first reintroduced bald eagle. Beil lives in Saratoga Springs, New York.

An outstanding biography of a brilliant and fascinating man who is well worth the attention.

Beil’s storytelling skill elevates the biographical information, mimicking the excitement and mystery of scientific discovery. A well-researched choice for YA biography collections about a significant scientific pioneer.

[An] enlightening narrative of a rule-breaker turned rule-maker.