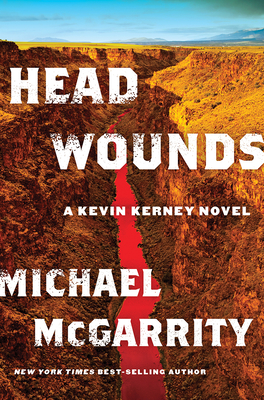 By Michael McGarrity
$26.95
Click Title for IN STOCK Location

This is book number 14 in the Kevin Kerney Novels series.

Clayton Istee, son of retired police chief Kevin Kerney, goes up against an elusive Mexican hitman in a mesmerizing story of murder, revenge, and redemption.

Given a chance to salvage his law enforcement career, Dona Ana County Sheriff’s Detective Clayton Istee catches a bizarre late-night double homicide at a Las Cruces hotel. Both victims, a man and a woman, have been scalped with their throats cut.

The murders show all the signs of a signature hit, but national and state crime databases reveal no similar profiles. Digging into the victims’ backgrounds, Clayton discovers that six months prior the couple had walked out of a nearby casino with $200,000 of a high-stakes gambler’s money.

He also learns the crime had been hushed up by an undercover federal DEA agent, who resurfaces and recruits Clayton for a dangerous mission to seize the Mexican drug lord responsible for the killings.

Thrust into the nightmare world of borderland drug wars and corrupt cops, Clayton duels with a cunning assassin poised to kill him and his family in a ferocious climax to the Kevin Kerney series that is sure to stun.

McGarrity knows his territory, so his plots always feel regionally grounded, accounting for scenes like the Apache ceremony that guides the dead 'from the Shadow World of human beings to the Real World beyond, the Land of Ever Summer.' Sheer poetry.
— Marilyn Stasio - New York Times Book Review

A shattering conclusion to a much-praised series. Starts with a shocker. Ends with a stunner. The strength of the characters matches the power of the action scenes.
— David Morrell, New York Times best-selling author of First Blood

Michael McGarrity is a master, and his latest mind-blower does not disappoint. I always rush to his work, then wait anxiously for another.
— Luis Alberto Urrea, author of The House of Broken Angels

Masterful. McGarrity hones a tale sharper than a villain’s scalping knife while bringing the Southwest setting to life with every stroke.
— Dwight Holing, author of The Sorrow Hand