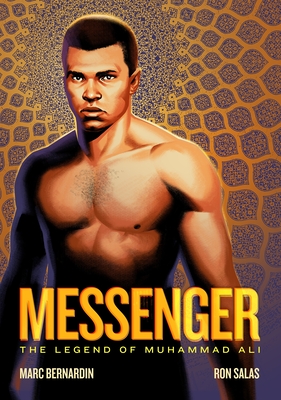 “Float like a butterfly, sting like a bee.” Muhammad Ali, one of the most revered—and controversial—figures of the twentieth century, immortalized those words with the beauty, strength, and originality of his boxing style. Now, his epic story is retold in this gorgeous, striking graphic novel that showcases exactly why he became celebrated worldwide as “The Greatest.”

Muhammad Ali was one of the most photographed—and photogenic—figures in the history of sports. He demanded to be looked at, to be seen, and this epic captures his meteoric rise from Cassius Clay to Olympian and heavyweight champion of the world with stunning illustrations befitting his storied legacy. Bringing readers through major moments of his life—his first meeting with civil rights leader Malcom X, his interview with sports broadcaster Howard Cosell about his reasons for opposing the Vietnam War, and his titanic bout with then-undefeated heavyweight champion George Foreman, among others—this graphic biography will be a crucial and instantly popular resource on The Greatest.

Marc Bernardin is a WGA Award-winning television writer-producer who has worked on Star Trek: Picard, The Continental, Carnival Row, Treadstone, Castle Rock, Critical Role: The Legend of Vox Machina, Masters of the Universe: Revelations, and Alphas. In an earlier life, he was a journalist for the Los Angeles Times, The Hollywood Reporter, Playboy, and Entertainment Weekly. In comics, he’s an Inkpot-winning writer of Adora and the Distance, Peter Parker: The Amazing Shutterbug, Genius, The Highwaymen, and Monster Attack Network. And he cohosts the Fatman Beyond podcast with Kevin Smith.

Ron Salas is a Philippine-born designer, illustrator and comic book artist.
Currently based in Glen Allen, VA he has worked as a merchandise designer with work for companies such as Disney, Universal, Hard Rock Cafe, Planet Hollywood and Playboy. He has also worked as a branding/marketing designer for a number of different brands.
He currently works as a freelance illustrator, primarily in comic books / graphic novels. Works include Existence 2.0/3.0, 28 Dracula : Company of Monsters, Six Million Dollar Man: Fall of Man, Prince Valiant and Spider-man.