Saint: A Novel (The World of the Narrows #1) (Hardcover) 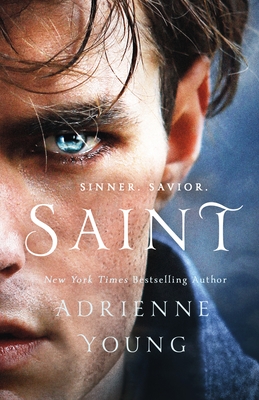 New York Times bestselling author Adrienne Young returns to the world of The Narrows with Saint, a captivating prequel to Fable and Namesake.

As a boy, Elias learned the hard way what happens when you don’t heed the old tales.

Nine years after his lack of superstition got his father killed, he’s grown into a young man of piety, with a deep reverence for the hallowed sea and her fickle favor. As stories of the fisherman’s son who has managed to escape the most deadly of storms spreads from port to port, his devotion to the myths and creeds has given him the reputation of the luckiest bastard to sail the Narrows.

Now, he’s mere days away from getting everything his father ever dreamed for him: a ship of his own, a crew, and a license that names him as one of the first Narrows-born traders. But when a young dredger from the Unnamed Sea with more than one secret crosses his path, Elias’ faith will be tested like never before. The greater the pull he feels toward her, the farther he drifts from the things he’s spent the last three years working for.

He is dangerously close to repeating his mistakes and he’s seen first hand how vicious the jealous sea can be. If he’s going to survive her retribution, he will have to decide which he wants more, the love of the girl who could change their shifting world, or the sacred beliefs that earned him the name that he’s known for—Saint.

Adrienne Young is a foodie with a deep love of history and travel and a shameless addiction to coffee. When she’s not writing, you can find her on her yoga mat, sipping wine over long dinners or disappearing into her favorite art museums. She lives with her documentary filmmaker husband and their four little wildlings in the Blue Ridge Mountains of North Carolina. She is the author of the New York Times bestselling Sky in the Deep duology and the Fable duology.

"...Rich, poetic prose that beautifully underscores the two main characters’ strengths, weaknesses, and beliefs...Returning and new readers alike will find much to love in this absorbing tale." - Kirkus

"A vividly drawn maritime setting, dramatic sea dives and daring rescues, not one but two formidable villains, and a swoony romance make this a treat for seafarers and landlubbers alike." - The Bulletin of the Center for Children's Books

"A dark maritime fantasy...immersive...and rich in sensory details. For readers who can’t get enough of strong female protagonists..." - Kirkus

"The salty sea and the promise of something hidden in its depths, had me reading this book at a furious pace. You don’t simply read Fable, you are ensnared by it. This is Adrienne Young’s best work of storytelling yet!” - Shea Ernshaw, New York Times bestselling author of The Wicked Deep

"Gripping, immersive, and absolutely masterful, Fable reels you in with the promise of beauty, and holds you tight with Young’s signature grit. I couldn’t turn the pages quickly enough." - Adalyn Grace, New York Times bestselling author of All The Stars and Teeth

"This fast-paced tale with a Victorian feeling is filled with an abundance of scandal, high fashion, intrigue, and, of course, romance... the delightfully swoonworthy love story will keep readers engaged and the pages turning eagerly as they hurtle toward the book’s satisfying conclusion. An entertaining story of forbidden love, family drama, and elegant couture." - Kirkus

"As an author, Young’s strength is in her ability to craft both strong female protagonists and worlds that are filled with realistic details." —Culturess

Young (The Girl the Sea Gave Back) blends adventure and intrigue in this lush nautical duology opener, crafting a flinty world in which danger lurks at every turn." - Publishers Weekly

"I could taste the salt in the air and feel the waves beneath the Marigold. In a brutal world Fable shines as tenacious yet vulnerable, unafraid to do what she must to survive. This story caught me by the throat and refused to let go!" - Shelby Mahurin, New York Times bestselling author of Serpent & Dove