Never After: The Stolen Slipper (The Chronicles of Never After #2) (CD-Audio) 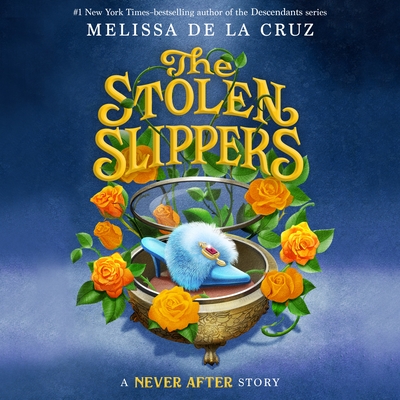 This is book number 2 in the The Chronicles of Never After series.

Real life and fairy tales collide in The Stolen Slipper, the second audiobook in the funny and exciting middle-grade Never After series from #1 New York Times bestselling author of the Descendants series Melissa de la Cruz.

Filomena Jefferson-Cho of North Pasadena--where nothing-ever-happens, teams up once more with dashing Jack Stalker, adorable Alistair and glamorous Gretel for another adventure in the land of Never After, this time to get the glass slipper back from Cinderella!

And we're about to learn who Cinderella really is. Neither a heroine or a victim, Cinderella is manipulative and cunning, and will do anything to be the princess of Eastphalia. The true heroes are her twin stepsisters, Hortense and Beatrice—Hori and Bea, who have been much maligned in reputation and whose lives have been effectively upended by their younger stepsister! For one, Prince Charming has been in love with Hori since they were children, but when King Gregor forces his son to throw a ball to pick a bride, Cinderella steals the spotlight and her happily-ever-after.

While attempting to help her sister, bookish Bea is captured by a terrible beast. Spells abound, ogres are unleashed, and evil will reign…or will it?

Only time and the bravery of Filomena’s gang will tell!

MELISSA DE LA CRUZ is the #1 New York Times, #1 Publisher’s Weekly and #1 Indie Bound bestselling author of many critically acclaimed and award-winning novels for readers of all ages, and edited the inspiring anthology of true stories, Because I Was a Girl. She grew up in Manila and moved to San Francisco with her family, where she graduated high school salutatorian from The Convent of the Sacred Heart. At Columbia University, she majored in art history and English. Melissa de la Cruz lives in West Hollywood with her husband and daughter.