Tokyo Dreaming: A Novel (Tokyo Ever After #2) (Paperback) 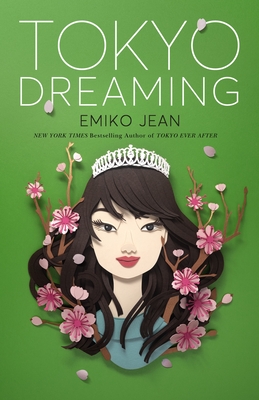 This is book number 2 in the Tokyo Ever After series.

Return to Tokyo for a royal wedding in Emiko Jean's New York Times bestseller Tokyo Dreaming, the sequel to beloved rom-com Tokyo Ever After!

When Japanese-American Izumi Tanaka learned her father was the Crown Prince of Japan, she became a princess overnight. Now, she’s overcome conniving cousins, salacious press, and an imperial scandal to finally find a place she belongs. She has a perfect bodyguard turned boyfriend. Her stinky dog, Tamagotchi, is living with her in Tokyo. Her parents have even rekindled their college romance and are engaged. A royal wedding is on the horizon! Izumi’s life is a Tokyo dream come true. Only. . .

Her parents’ engagement hits a brick wall. The Imperial Household Council refuses to approve the marriage citing concerns about Izumi and her mother’s lack of pedigree. And on top of it all, her bodyguard turned boyfriend makes a shocking decision about their relationship. At the threat of everything falling apart, Izumi vows to do whatever it takes to help win over the council. Which means upping her newly acquired princess game.

"A heartwarming and thrilling story about royal love." —Time

"Fans of [Tokyo Ever After] will find much to enjoy in Princess Izumi's continued struggles to fit into the highly conformist society of Japanese royalty. . . . Readers will cheer as Izumi faces new challenges, supports her mother, and stays true to herself. Izumi's wry wit and clear-eyed view of both the charms and drawbacks of life in Japan balance the fairy-tale romance." —Booklist

"Readers will find themselves laughing and screaming out loud at the characters’ choices. . . . Buy this book for any collection.” —School Library Journal

"A newly minted royal navigates her way between royal protocols and her own heart. . . . A solid sequel about a princess finding her voice.” —Kirkus Reviews

Praise for TOKYO EVER AFTER

“If The Princess Diaries met Crazy Rich Asians, you would get close to the wonderfully chaotic splendor of Tokyo Ever After.” —Entertainment Weekly (Best Book of Summer)

“Izumi’s determined spirit and character arc will endear readers to her. A fun experience that readers will want to read again and again.” —School Library Journal, starred review (Best Book of the Year)

“Despite the swoon-worthy love interest and glittering palaces, Tokyo Ever After is not your typical princess story. Izumi is a spunky, irreverent, lovable narrator who struggles to reconcile her American upbringing with her Japanese heritage. A fresh and distinctly modern fairy tale.” —Katharine McGee, author of American Royals

“A gorgeously detailed rom-com that made me want to move to Japan and never come back.” —Nicola Yoon, author of The Sun Is Also a Star