Tokyo Ever After: A Novel (CD-Audio) 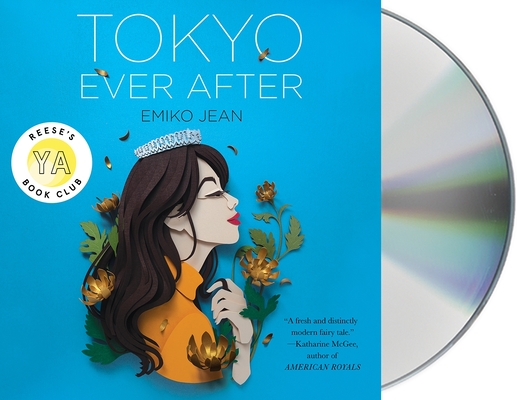 This is book number 1 in the Tokyo Ever After series.

So much fun! This novel has it all, characters you'll completely fall in love, great settings and meaty subjects to get your teeth into. When Izumi, a Japanese American living in a very white hippy West Coast town, goes in search of the father she hasn't met, she's thrown into a completely different cultural challenge. Not only does she discover her father is a member of Japan's Imperial family, but that by descent, she is in fact a Princess herself. Much shenanigans ensue, as Izumi must navigate the alien world her father lives in and try to find her place in it. I cannot wait for the next book in this series! — Becky Doherty

“It's easy to compare this book to The Princess Diaries, but frankly it's more than that. It's made of beautiful, vivid writing, with a fiercely charming lead, and a city (Tokyo) coming to life itself on the page. It will speak in particular to those who feel out of place or torn between two worlds, while offering hope and fun and wonder. Yes, there's romance, but there's so much more, and Izumi may well be any reader's new favorite princess.”
— Lindsay Howard, Lark and Owl Booksellers, Georgetown, TX

The Princess Diaries meets Crazy Rich Asians in Emiko Jean’s Tokyo Ever After, a “refreshing, spot-on” (Booklist, starred review) story of an ordinary Japanese-American girl who discovers that her father is the Crown Prince of Japan.

Izumi Tanaka has never really felt like she fit in—it isn’t easy being Japanese American in her small, mostly white, northern California town. Raised by a single mother, it’s always been Izumi—or Izzy, because “It’s easier this way”—and her mom against the world. But then Izumi discovers a clue to her previously unknown father’s identity…and he’s none other than the Crown Prince of Japan. Which means outspoken, irreverent Izzy is literally a princess.

In a whirlwind, Izumi travels to Japan to meet the father she never knew and discover the country she always dreamed of. But being a princess isn’t all ball gowns and tiaras. There are conniving cousins, a hungry press, a scowling but handsome bodyguard who just might be her soulmate, and thousands of years of tradition and customs to learn practically overnight.

Izumi soon finds herself caught between worlds, and between versions of herself—back home, she was never “American” enough, and in Japan, she must prove she’s “Japanese” enough. Will Izumi crumble under the weight of the crown, or will she live out her fairy tale, happily ever after?

Look for the sequel to Tokyo Ever After in 2022!

“Izumi’s determined spirit and character arc will endear readers to her. A fun experience that readers will want to read again and again.” —School Library Journal, starred review

“Move over, Mia Thermopolis! Princess Izumi will completely capture your heart while making you laugh nonstop. With an unforgettable voice and a heart-fluttering romance, Tokyo Ever After is an instant favorite.” —Gloria Chao, author of American Panda

“Despite the swoon-worthy love interest and glittering palaces, Tokyo Ever After is not your typical princess story. Izumi is a spunky, irreverent, lovable narrator who struggles to reconcile her American upbringing with her Japanese heritage. A fresh and distinctly modern fairy tale.” —Katharine McGee, New York Times bestselling author of Majesty