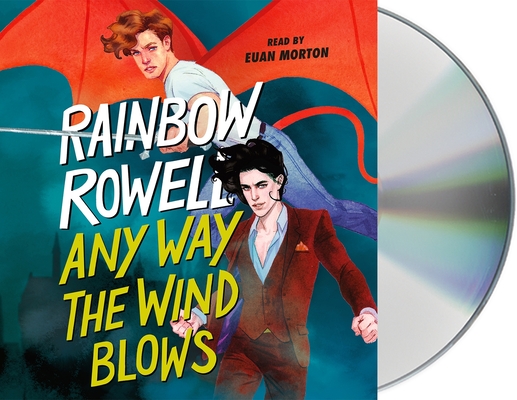 This is book number 3 in the Simon Snow Trilogy series.

"Euan Morton returns to narrate the final installment in the Simon Snow series. Morton's exceptional talent shines as he modulates between European and American accents and seamlessly shifts tones to bring each distinct character to life...Full of intense passion, this conclusion should not be missed." -AudioFile Magazine, Earphones Award winner

In Any Way the Wind Blows, Simon and Baz and Penelope and Agatha have to decide how to move forward.

For Simon, that means deciding whether he still wants to be part of the World of Mages — and if he doesn't, what does that mean for his relationship with Baz? Meanwhile Baz is bouncing between two family crises and not finding any time to talk to anyone about his newfound vampire knowledge. Penelope would love to help, but she's smuggled an American Normal into London, and now she isn't sure what to do with him. And Agatha? Well, Agatha Wellbelove has had enough.

Any Way the Wind Blows takes the gang back to England, back to Watford, and back to their families for their longest and most emotionally wrenching adventure yet.

This audiobook is a finale. It tells secrets and answers questions and lays ghosts to rest.

Carry On was conceived as a book about Chosen One stories; Any Way the Wind Blows is an ending about endings. About catharsis and closure, and how we choose to move on from the traumas and triumphs that try to define us.

"[Euan] Morton brings distinct voices and emotions to every character...Listeners will be hard-pressed to believe they aren't listening to a full-cast production." -AudioFile Magazine on Wayward Son (Earphones Award winner)

"There's something spellbinding about Euan Morton's voice, which is only appropriate for this novel set in magical England...As the story builds, there are plenty of moments of intrigue and romance that will have listeners catching their breath. Through it all, Morton stays in perfect, sympathetic step." -AudioFile Magazine on Carry On (Earphones Award winner)

"Scottish actor Euan Morton narrates and does a stunning job, especially with the complex characters of Simon and Baz...An essential purchase for fans of Harry Potter and Rainbow Rowell, as well as lovers of fantasy." -School Library Journal on Carry On (starred review)