We Free the Stars (Sands of Arawiya #2) (Paperback) 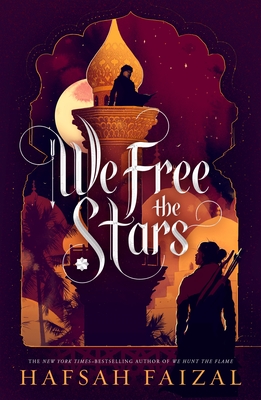 This is book number 2 in the Sands of Arawiya series.

The second book in the Sands of Arawiya duology by the masterful Hafsah Faizal—the follow-up to the smash New York Times bestselling novel We Hunt the Flame.

Darkness surged in his veins. Power bled from her bones.

The battle on Sharr is over. The Arz has fallen. Altair may be captive, but Zafira, Nasir, and Kifah are bound for Sultan’s Keep, determined to finish the plan Altair set in motion: restoring the hearts of the Sisters of Old to the minarets of each caliphate, finally bringing magic to all of Arawiya. But they are low on resources and allies alike, and the kingdom teems with fear of the Lion of the Night’s return.

As the zumra plots to overthrow Arawiya’s darkest threat, Nasir fights to command the magic in his blood. He must learn to hone his power, to wield it against not only the Lion but his father as well, trapped under the Lion’s control. Zafira battles a very different darkness festering in her through her bond with the Jawarat—it hums with voices, pushing her to the brink of sanity and to the edge of a chaos she dares not unleash. In spite of everything, Zafira and Nasir find themselves falling into a love they can’t stand to lose . . . But time is running out, and if order is to be restored, drastic sacrifices will have to be made.

Lush and striking, hopeful and devastating, We Free the Stars is the conclusion to the Sands of Arawiya duology by New York Times–bestselling author Hafsah Faizal.

Hafsah Faizal is the New York Times bestselling author of We Hunt the Flame, and the founder of IceyDesigns, where she creates websites for authors and beauteous goodies for everyone else. When she’s not writing, she can be found designing, deciding between Assassin’s Creed and Skyrim, or traversing the world. Born in Florida and raised in California, she now resides in Texas with her family and a library of books waiting to be devoured. Visit her on her website!

“Each achingly raw character arc is fully realized, delivering a satisfying close to the zumra’s story. Faizal’s craft continues to evolve as she demonstrates a facility with language and literary technique, drawing readers into a fantasy world and into the lives of characters that feel impressively real. Moments of humor and edge-of-your-seat action easily balance the book’s dark, tragic depths, creating a memorable story at the height of the fantasy genre.” —Booklist, starred review

“Faizal continues the lush world building that marked the first of this duology, expanding upon the Persian-inspired setting and guiding readers through all of Arawiya, introducing new cultural aspects and making the stakes clear; especially deft here is the portrayal of trauma on a mass scale. . .Those who were left breathless by the previous installment will heave a sigh of relief.” —Bulletin of the Center for Children's Books

Praise for We Hunt the Flame:

“Drawing inspiration from ancient Arabia, We Hunt the Flame gives exquisitely detailed insight into a cultural experience; this debut, about identity and unlikely allies, features subtly nuanced and deeply reflective characters. Layering high-stakes action with moods ranging from casual humor to raw anguish, Faizal bends fantasy tropes to her will to tell a fresh and gripping story about love, honor, and self-discovery that will leave readers scrambling for more.” —Booklist, starred review

“Faizal matches a sweeping, ancient Arabian setting of shifting sand dunes, crumbling ruins, and fickle magic with an engrossing tale of political intrigue and human and divine warring powers. That sense of epicness, however, is carefully grounded by her deeply flawed, morally conflicted, and endlessly fascinating characters; as individuals, they are each interesting, but it’s the developing dynamic among the group that is truly compelling. . .Fans of Bardugo’s Six of Crows or Chokshi’s The Star-Touched Queen will be thrilled with the book’s impressive world building, stellar cast, and intricate story.” —The Bulletin of the Center for Children's Books, starred review

“Lyrical and filled with adventure, a slow-burn romance, and an unforgettable cast of characters in a world based on ancient Arabia, this is a debut series not to be missed. . .Fans of Sabaa Tahir’s An Ember in the Ashes and Tomi Adeyemi’s Children of Blood and Bone should get excited for their next obsession.” —School Library Journal, starred review

“Faizal builds a world of immense detail and complexity. Readers smell the different foods in the marketplace and begin to understand the many layers of each culture in Arawiya. . .Faizal explores the strength of an independent female character in a world that silences women. As a result, Zafira’s courage will teach readers the power of the human spirit.” —VOYA, starred review

“Debut author Faizal paints a vivid world, inspired by ancient Arabia and its mythology, that will appeal to fantasy and romance readers as well as fans of the Assassin's Creed video games. . .An appealing spin on traditional fantasy elements.” —Kirkus Reviews

“Hafsah Faizal creates a dazzling and beautiful world that will make you not want to put this book down.” —Seventeen Magazine

“Faizal’s strong debut develops its engaging premise with evocative worldbuilding and memorable characters. . .Lush descriptions of setting and food offer a vivid atmosphere, and the slow-brewing romance is an engaging contrast to the harrowing emotional and physical journey at the heart of the story.” —Publishers Weekly

“Hafsah Faizal's writing is so lush and evocative that We Hunt the Flame is gripping right from the first page.” —PopSugar