The Chosen and the Beautiful (Hardcover) 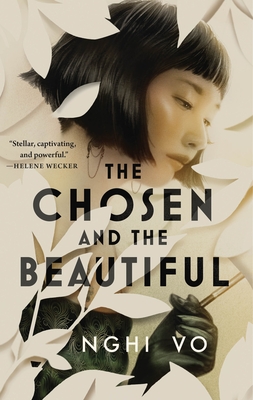 A fresh new take on a beloved classic, The Chosen and the Beautiful follows Jordan Baker, a queer Vietnamese immigrant, as she navigates the dazzling society of the 1920's. It is a coming of age story filled with magic, mystery, and exclusive parties. With its rich prose and beautiful imagery, this is the perfect read for fans of the original source material, The Great Gatsby, and new readers alike.

“What would you give up to have it all? Magical and queer as hell, Jordan Baker takes readers through Jazz Age New York as her snark, rage, and feelings for Daisy keep us turning pages until early morning. Like one of Gatsby’s cursed parties, this book was one I wanted to never end.”
— Abby Rice, The Briar Patch, Bangor, ME

An Instant National Bestseller!
An Indie Next Pick!

“A vibrant and queer reinvention of F. Scott Fitzgerald's jazz age classic. . . . I was captivated from the first sentence.”—NPR

“Vo has crafted a retelling that, in many ways, surpasses the original.”—Kirkus Reviews, starred review

Jordan Baker grows up in the most rarefied circles of 1920s American society—she has money, education, a killer golf handicap, and invitations to some of the most exclusive parties of the Jazz Age. She’s also queer and Asian, a Vietnamese adoptee treated as an exotic attraction by her peers, while the most important doors remain closed to her.

But the world is full of wonders: infernal pacts and dazzling illusions, lost ghosts and elemental mysteries. In all paper is fire, and Jordan can burn the cut paper heart out of a man. She just has to learn how.

Nghi Vo’s debut novel, The Chosen and the Beautiful, reinvents this classic of the American canon as a coming-of-age story full of magic, mystery, and glittering excess, and introduces a major new literary voice.

Nghi Vo is the author of the novels Siren Queen and The Chosen and the Beautiful, as well as the acclaimed novellas When the Tiger Came Down the Mountain and The Empress of Salt and Fortune, a Locus and Ignyte Award finalist and the winner of the Crawford Award and the Hugo Award. Born in Illinois, she now lives on the shores of Lake Michigan. She believes in the ritual of lipstick, the power of stories, and the right to change your mind.

“Deserves to be read alongside the book that inspired it. Vo’s prose is beautifully supple, and the novel shines when she reads “Gatsby” against the grain... A sumptuous, decadent read.”—The New York Times

“A luminous shift in perspective for a classic, this retelling will never let you look at Gatsby the same way.”—TIME Magazine

“I love it with the passion of a thousand burning hearts... Vo’s audacious amendments shift the register of “The Great Gatsby,” creating a story that galvanizes Fitzgerald’s classic and leaves a new one vibrating alongside... from the old bones of an American classic, Vo has conjured up something magically alive.”—The Washington Post

“This is a wholly enthralling vision of the American Dream as observed and experienced by one suspended in a liminal place — accepted, but not really a part of the whole; apart, but not quite separate. Vo gives us a dreamy, sharply-drawn glamour; a vibrant, penetrating exploration of character. The Chosen and the Beautiful is exactly enough — but why not indulge with a reread?”—NPR

"Like the bouquet off the finest vintage found in Gatsby’s cellar, magic suffuses and floats off the pages of Nghi Vo’s THE CHOSEN AND THE BEAUTIFUL. It is more than a reimagining of a classic; it is a work of art unique in its voice, viewpoint, and effervescent prose. Her words slice like a paper cut, yet in their healing, they leave one marked forever."—James Rollins, #1 New York Times bestselling author

“Vo has crafted a retelling that, in many ways, surpasses the original, adding logic and depth to characters’ motivations while still—uncannily—unspooling the familiar story. Astonishingly crafted, with luscious prose and appeal for both fans of the original and those who always felt The Great Gatsby missed the mark.”—Kirkus Reviews, *starred review*

"An utterly captivating series of speakeasies, back-seat trysts, parties both grand and intimate and romances both magical and mundane. . . . Vo is a remarkable writer whose talent for reviving Fitzgerald’s style of prose is reminiscent of Susanna Clarke channeling Jane Austen in Jonathan Strange & Mr. Norrell. But it is Vo’s additions to Gatsby’s original plot that truly shine. . . . [She] has transformed The Great Gatsby utterly." —BookPage, *starred review*

"This is The Great Gatsby I wish I had gotten in school. . . . Required reading and a bold Asian American entry into the literary canon that I never wanted to put down."—Sequoia Nagamatsu, author of How High We Go in the Dark

"Exquisite, incandescent, and queer AF! Nghi Vo has brought the subtext to the surface, and given us the Gatsby we deserve and the Jordan we need as we enter a new era of horrific inequality and impending cataclysm."—Sam J. Miller, author of Blackfish City

"The Chosen and the Beautiful finds Jordan fighting for her place in this Gatsby-adjacent world as an outsider, a plight that Vo illuminates in heartbreaking specificity."—TIME Magazine

"What if The Great Gatsby except sexy star golfer Jordan Baker is a queer Vietnamese adoptee? And there's magic? You have our attention."—USA Today

“The story has Gatsby's kaleidoscopic extravagance, with Jordan playing the lead role. Beautifully written and magical, The Chosen and the Beautiful is destined to become a classic.”—Ms. Magazine

"Soaked in gin and dark magic, The Chosen and the Beautiful is one of 2021’s must-read novels."—Bustle

"Nghi Vo has written us the adaptation of The Great Gatsby that we deserve: a sparkling novel of excess and over-indulgence told from Jordan Baker’s point of view."—Book Riot

"Turns Fitzgerald’s American classic on its head to present a world recognizable in outline, but brought to new life in imaginative detail. The Chosen and the Beautiful is magical, quite literally. In this Jazz Age New York, ghosts haunt mansion corridors, flappers drink special elixirs that make them float, and members of the elite have obtained their fame and fortune by selling their souls to demons."—The Daily Beast

"One of the buzziest fantasy releases of the month is an alternate universe adaptation of The Great Gatsby, keeping the dazzle of the 1920s while adding the challenges of being a queer Vietnamese adoptee. Plus, ghosts both metaphorical and perhaps literal."—Den of Geek

“Beloved for her “Singing Hills Cycle” novellas, Vo goes ambitiously full-length with her tale of queer Vietnamese adoptee Jordan Baker, who uses magic to get what she wants in a 1920s Gatsby-like framework." —Library Journal

"A dazzling reckoning with the fragile and beguiling fantasies we conjure to make sense of the past. It is also a (re)vision of The Great Gatsby, a mesmerizing, fearless unravelling of a text at the heart of the American literary canon."—Ancillary Review of Books

“The Chosen and the Beautiful is the perfect reinvention of the classic summer reading list standby.”—The Week

“Vo’s prose is lush and extraordinarily detailed, and so reminiscent of Fitzgerald’s writing but somehow even more atmospheric and lyrical." —The Nerd Daily

“Nghi Vo's stellar transformation of The Great Gatsby recasts the 'careless' Jordan Baker as a woman of depth and sharpness, a socialite forced to live in the margins of others’ lives. In Vo’s telling, the glitter of Gatsby’s parties conceals a sinister struggle—one where the players must survive on charms both literal and figurative, and the line between the invented and the real is endlessly blurred. Like Jordan’s own paper creations, The Chosen and the Beautiful captivates with its artistry and its power.” —Helene Wecker, author of The Golem and the Jinni

“The Chosen and the Beautiful is gorgeous and gripping, shining with language that shows us all the facets and dangers of yearning. Nghi Vo subverts and expands the possibilities of an American story, and magic is in the marrow of every sentence. I'm in awe of this book's expansive imagination and its exploration of what it means to discover desire, make your own myths, and define your belonging." —K-Ming Chang, author of Bestiary and a National Book Foundation 5 Under 35 Honoree

“Luxurious, thrilling, and sexy, Nghi Vo's debut novel dives into the world of The Great Gatsby and wears it like a second skin. A shapeshifter of a book that had me hypnotized from the first pages, The Chosen and the Beautiful brings new intensity to a story you thought you knew.” —Adrienne Celt, author of Invitation to a Bonfire

“Decadent. Visual. Imaginative. Genius. Not enough words to praise this page-turning novel of sorcery, infernal compacts, and enchanted elixirs, in an altogether different 1920s New York. Nghi Vo snips apart, then magically weaves together a familiar story in a wholly original and decidedly unfamiliar way. Redo all the classics. And do them like this!” —P. Djèlí Clark, winner of the Alex, Locus, and Nebula Awards and author of Ring Shout

“A sumptuous novel that tangles with race, magic, sexuality, and class. Nghi Vo creates a world that drips with champagne and magic, where outsider’s views are the only ones that matter, and it's impossible to be sure who is or is not other. It’s bold to play in the realm of The Great Gatsby and Vo’s acerbic Jordan Baker is the perfect woman to do it.” —Erika Swyler, author of The Book of Speculation

“This book is Gatsby the way it should have been written–dark, dazzling, and fantastical. Of course Jordan Baker should have been the main character. Of course everyone should have been messing with magic. Vo has created a perfect response to Fitzgerald in tone, voice, and theme.” —R. F. Kuang, winner of the Astounding Award and author of The Poppy War

“The Chosen and the Beautiful is a subversive, sexy, atmospheric, sweltering, gin-soaked, Hell-haunted vision of Gatsby's New York, with prose that will pull you under. I loved it.” —Alix E. Harrow, winner of the Hugo Award and author of The Ten Thousand Doors of January

“Crisp as paper and delirious as a fever dream, this is a redrawn Gatsby daubed in gold leaf and lip rouge and blood. Nghi Vo gives a freshly imagined Jordan Baker her due, while infusing her glittering New York with a bottomless magical menace that feels both excitingly new and cosmically true to Fitzgerald’s original.” —Melissa Albert, New York Times bestselling author of The Hazel Wood

“Nghi Vo’s perfectly honed prose embodies the intoxicating, knife-sharp dazzle of cruel wealth and hollow people. This book is as sharp and strange as the taste of a licked silver spoon—it’s breathtaking.”—Shelley Parker-Chan, author of She Who Became the Sun

“I adore this Jordan and her shimmering rage, the way it laces all her party glamour. It adds a queer vitality to this story that really resonates with me, her flamboyance being so rageful. The prose is like a bite of caramel that rips out your teeth. It's seething, creamy. It has a bloody taste.” —Hannah Abigail Clarke, bestselling author of The Scapegracers