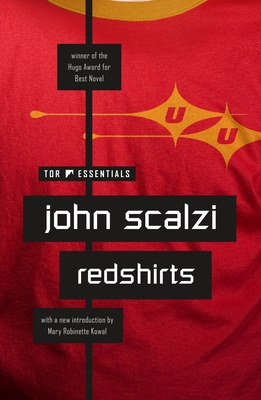 Star Trek Fans, this hilarious read is for you! A quick read and a great parody, Redshirts also has a meaningful message and reminds you that you never want to be the guy in the red shirt when the captain sends you on a mission! — Jess Elder

Redshirts is John Scalzi’s Hugo Award-winning novel of the starship ensigns who were expendable...until they started comparing notes.

Ensign Andrew Dahl has just been assigned to the Universal Union Capital Ship Intrepid, flagship of the Universal Union since the year 2456. It’s a prestige posting, with the chance to serve on "Away Missions" alongside the starship’s famous senior officers.

Life couldn’t be better…until Andrew begins to realize that (1) every Away Mission involves a lethal confrontation with alien forces, (2) the ship’s senior officers always survive these confrontations, and (3) sadly, at least one low-ranking crew member is invariably killed. Unsurprisingly, the savvier crew members belowdecks avoid Away Missions at all costs. Then Andrew stumbles on information that transforms his and his colleagues’ understanding of what the starship Intrepid really is…and offers them a crazy, high-risk chance to save their own lives.

With a new introduction by Mary Robinette Kowal, author of the Hugo-winning The Calculating Stars.

JOHN SCALZI is one of the most popular SF authors of his generation. His debut Old Man's War won him the John W. Campbell Award for Best New Writer. His New York Times bestsellers include The Last Colony, Fuzzy Nation,and Redshirts (which won the 2013 Hugo Award for Best Novel), and 2020's The Last Emperox. Material from his blog, Whatever, has also earned him two other Hugo Awards. Scalzi also serves as critic-at-large for the Los Angeles Times. He lives in Ohio with his wife and daughter.