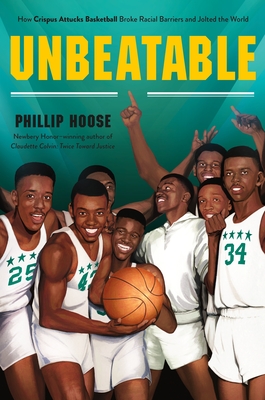 By winning the state high school basketball championship in 1955, ten teens from an Indianapolis school meant to be the centerpiece of racially segregated education in the state shattered the myth of their inferiority. Their brilliant coach had fashioned an unbeatable team from a group of boys born in the South and raised in poverty. Anchored by the astonishing Oscar Robertson, a future college and NBA star, the Crispus Attucks Tigers went down in history as the first state champions from Indianapolis and the first all-black team in U.S. history to win a racially open championship tournament—an integration they had forced with their on-court prowess.

From native Hoosier and award-winning author Phillip Hoose comes this true story of a team up against impossible odds, making a difference when it mattered most.

Phillip Hoose is an award-winning author of books, essays, stories, songs and articles. Although he first wrote for adults, he turned his attention to children and young adults in part to keep up with his own daughters. His book Claudette Colvin won a National Book Award and was dubbed a Publisher's Weekly Best Book of 2009. He is also the author of Hey, Little Ant, co-authored by his daughter, Hannah; It’s Our World, Too!; The Race to Save the Lord God Bird; The Boys Who Challenged Hitler; and We Were There, Too!, a National Book Award finalist. He has received a Jane Addams Children’s Book Award, a Christopher Award, a Boston Globe-Horn Book Award, and multiple Robert F. Sibert Honor Awards, among numerous honors. He was born in South Bend, Indiana, and grew up in the towns of South Bend, Angola, and Speedway, Indiana. He was educated at Indiana University and the Yale School of Forestry. He lives in Portland, Maine.

“Hoose does a brilliant job of portraying the surrounding historical context, exploring the migration of black families from the South to Indiana, showing how Jim Crow practices were just as present in the North as in the South, and describing the deep groundswell of support for basketball in Indiana. . ..Attucks! doesn't pretend that we've outlived the racism of the American past, all the while showing readers how being grounded in one's self-worth and committed to the pursuit of excellence can have a lasting impact on a community. A powerful, awe-inspiring basketball-driven history.” —Kirkus Reviews, starred review

“Excessively readable, this should appeal to sports fans and those looking for a good book about the civil rights era. Exemplary notes and sources will push readers—adults included—to learn even more.” —Booklist, starred review

“The evolving fast-break style of play, the local rivalries, and the sheer prowess of individual players guarantee a compelling read, but the story of how a mini dynasty of high school players turned the tables on segregationists extends interest beyond sports fans. . .When kids think they’ve reached the end of their civil rights era education, hand them this.” —The Bulletin of the Center for Children's Books, starred review

“With sharp insight and an engaging writing style, the author relates how high school basketball engulfed the way of life in different Indiana communities and was instrumental in dismantling parts of segregation. Numerous black-and-white photos and newspaper articles supplement this exceedingly engaging work. . .A great purchase for YA nonfiction collections.” —School Library Journal

“A fresh, revelatory look at a familiar story that is central to understanding Indianapolis.” —The Indianapolis Star

“I’d always been a fan of Oscar Robertson, arguably the best basketball player of the twentieth century, but until I read Attucks!—the thrilling, moving, enlightening story of his roots in deeply segregated Indianapolis—I had no idea of how important a life he had led.” —Robert Lipsyte, author of SportsWorld: An American Dreamland