The Ambassador of Nowhere Texas (CD-Audio) 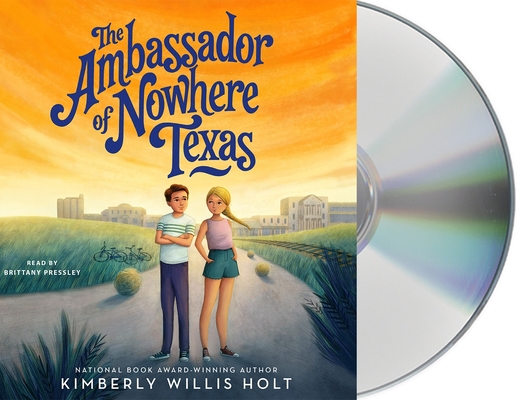 Kimberly Willis Holt's The Ambassador of Nowhere, Texas is a stunning post-9/11 companion to the National Book Award-winner When Zachary Beaver Came to Town.

Decades after the Vietnam War and Toby’s life-changing summer with Zachary Beaver, Toby’s daughter Rylee is at a crossroads—her best friend Twig has started pushing her away just as Joe, a new kid from New York, settles into their small town of Antler. Rylee befriends Joe and learns that Joe’s father was a first responder on 9/11. The two unlikely friends soon embark on a project to find Zachary Beaver and hopefully reconnect him with Rylee's father almost thirty years later.

This beautiful middle grade novel is a tribute to friendships—old and new—and explores the challenges of rebuilding what may seem lost or destroyed.

A Macmillan Audio production from Henry Holt and Company

Twenty three years ago Kimberly Willis Holt stopped talking about wanting to be a writer and started to pursue her dream. Because of her family's Louisiana roots she considers herself a southerner, but her father's military career took her to places beyond the South, including Paris and Guam.

She's the author of more than fifteen books for a wide range of ages, many of which have won awards and honors. Her third novel, When Zachary Beaver Came to Town won the National Book Award for Young People's Literature. She writes and gardens in Texas.

Brittany Pressley is an Audiofile Earphones award winning narrator in NYC. She has recorded over 100 titles and has received several nominations for American Library Association's annual list of Amazing Audiobooks for Young Adults. She is also an accomplished singer/songwriter and voice actress. Her voice can be heard on national and international TV and radio commercials as well as several animated series and video games. She is a proud graduate of Columbia University.