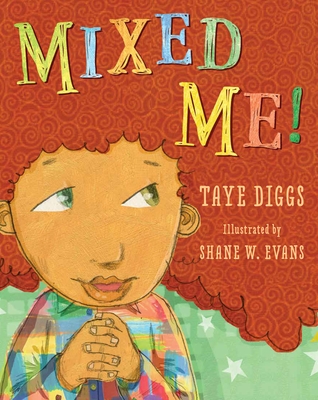 The team who brought us Chocolate Me!, Taye Diggs and illustrator by Shane W. Evans, return with an upbeat story about a mixed-race boy in this heartfelt picture book. Mixed Me!.

Mom and Dad say I'm a blend of dark and light:
"We mixed you perfectly, and got you just right."

Mike has awesome hair. He has LOTS of energy! His parents love him. And Mike is a PERFECT blend of the two of them.

Still, Mike has to answer LOTS of questions about being mixed. And he does, with LOTS of energy and joy in this charming story about a day in the life of a mixed-race child.

Taye Diggs is an actor whose credits include motion pictures (How Stella Got Her Groove Back and Chicago), stage (Rent, Wicked), and television (Private Practice). He lives in Los Angeles and New York City with his wife, the actress Idina Menzel, and their son.

Shane W. Evans studied at Syracuse University School of Visual and Performing Arts and graduated in 1993 and began traveling the world. In addition to contract work in illustration, graphic design and web design for major companies, Evans has conceptualized and illustrated numerous children’s books. Many of the books have been featured in the media such as The Oprah Winfrey Show, The Today Show, NBA Inside Stuff, Reading Rainbow and Late Night with David Letterman. Shane has received much acclaim within the children’s literary field for his work on children’s books such as "Osceola," "The Way The Door Closes," "Shaq and the Beanstalk" and "Take It To The Hoop Magic Johnson." His accolades range from being honored by First Lady Laura Bush at the 2002 National Book Festival, The Boston Globe-Horn Book Award and The Orbis Pictus Award for Outstanding Non-Fiction for Children.

“Mike's unerring sense of self (“I'm a beautiful blend of dark and light”) and the powerful love that surrounds him make this a rewarding, valuable read for families of any makeup.” —Publisher's Weekly, starred review

“[A] well-written, fun story of acceptance, friendship, and love. The text, colors, and design make this a good choice for read-alouds, but there are many details in the artwork (usually containing the word “mixed” or a synonym thereof) that make it good for one-on-one sharing.” —School Library Journal, starred review

“Some kids call him “Mixed-up Mike,” but the protagonist makes clear that he isn't mixed-up at all—just mixed . . . Mike's confidence in his own appearance and coolness as well as the way he proudly embodies diversity, including a certain level of androgyny, make this a refreshing read. Evans' integration of rough-textured fabrics into lively and colorful mixed-media illustrations will make readers want to reach out and touch them."—Kirkus Reviews, starred review

“For the millions of mixed-race Americans who have to endure the constant questioning of their identity, [Mike] has an answer: “I'm a beautiful blend of dark and light, / I was mixed up perfectly, / and I'm JUST RIGHT!” . . . The story's joyful message will resonate with multiracial readers and their families, leaving them with the cheeky takeaway: if you have a problem with me, it's your problem.” —Booklist