The Geography of Risk: Epic Storms, Rising Seas, and the Cost of America's Coasts (Paperback) 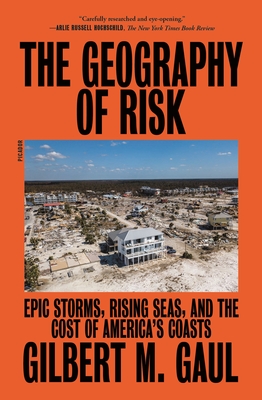 By Gilbert M. Gaul
$18.00
Click Title for IN STOCK Location

This century has seen the costliest hurricanes in U.S. history—but who bears the brunt of these monster storms?

Consider this: Five of the most expensive hurricanes in history have made landfall since 2005: Katrina ($160 billion), Ike ($40 billion), Sandy ($72 billion), Harvey ($125 billion), and Maria ($90 billion). With more property than ever in harm’s way, and the planet and oceans warming dangerously, it won’t be long before we see a $250 billion hurricane. Why? Because Americans have built $3 trillion worth of property in some of the riskiest places on earth: barrier islands and coastal floodplains. And they have been encouraged to do so by what Gilbert M. Gaul reveals in The Geography of Risk to be a confounding array of federal subsidies, tax breaks, low-interest loans, grants, and government flood insurance that shift the risk of life at the beach from private investors to public taxpayers, radically distorting common notions of risk.

These federal incentives, Gaul argues, have resulted in one of the worst planning failures in American history, and the costs to taxpayers are reaching unsustainable levels. We have become responsible for a shocking array of coastal amenities: new roads, bridges, buildings, streetlights, tennis courts, marinas, gazebos, and even spoiled food after hurricanes. The Geography of Risk will forever change the way you think about the coasts, from the clash between economic interests and nature, to the heated politics of regulators and developers.

Gilbert M. Gaul has twice won the Pulitzer Prize and has been shortlisted for the Pulitzer four other times. For more than thirty-five years, he worked as an investigative journalist for The Washington Post, The Philadelphia Inquirer, and other newspapers. He has reported on non-profit organizations, the business of college sports, homeland security, the black market for prescription drugs, and problems in the Medicare program. His books include Giant Steps, Free Ride (with Neill A. Borowski), and Billion-Dollar Ball. He was a Nieman Fellow at Harvard University and a Ferris Fellow at Princeton University. Gaul lives in New Jersey.

"Probing . . . There’s a lesson about developing our coastlines to be learned from Gaul’s reporting, but it’s not one that everyone is ready to hear." —Reid Singer, Outside

"Gaul’s work provides a sobering historical and present-day account on a seemingly never-ending cycle.Thoughtfully written, minutely researched, and eminently readable, this sobering analysis seeks to make people start asking questions about the viability of building on the coasts in an era of climate change." —Laura Hiatt, Library Journal (starred review)

"Punchy . . . Mixing breezy storytelling with the nitty-gritty details of inside-politicking, Gaul demonstrates how state and federal agencies have tried, but failed, to rein in developers and decelerate coastal development." —Publishers Weekly