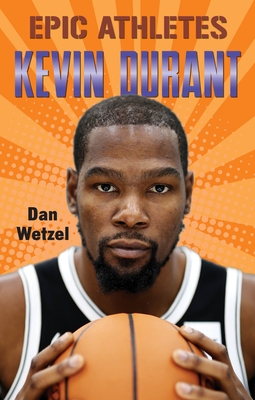 This is book number 8 in the Epic Athletes series.

In 2016, Kevin Durant shocked the basketball world when he decided to sign with the Golden State Warriors. Many questioned why one of the league's best players would join a team that was already stacked with talent—didn't he want to make a name for himself as the sole leader of a team?

Kevin would have the last laugh, winning two championships and putting to rest any questions about his incredible legacy. In choosing to tune out the noise, he instead set his sights on success, maintaining the same winning attitude that has helped him achieve and overcome ever since he was kid. Even after his father abandoned the family when he was a young boy, when he was told he was too skinny to make an impact in the NBA, Kevin ignored the critics and forged his own path to victory.

Filled with sports action and comic-style illustrations, this inspiring biography recaps the life of one of the most talented scorers in NBA history.

* "Wetzel knows how to organize the facts and tell a good story. . . an unusually informative and enjoyable sports biography for young readers." —Booklist, STARRED review of Epic Athletes: Stephen Curry

"Young hoop dreamers will find this a highly engaging read about one of today’s most skilled players." —Kirkus

"Dan Wetzel offers a well-organized and very readable account of Durant’s youth as well as his stellar career." —Booklist

"This detailed biography is full of play-by-play action sequences and illuminates Durant’s character, on and off the court. Young readers will find much to admire in Durant; the text’s pacing and sports-heavy details will keep them hooked until the final pages." —School Library Journal

* "Wetzel knows how to organize the facts and tell a good story. His insights into high school, collegiate, and professional basketball, along with his use of well-chosen quotes from insiders, make this book an unusually informative and enjoyable sports biography for young readers." —Booklist, STARRED review of Epic Athletes: Stephen Curry