Fate of the Fallen (The Shroud of Prophecy #1) (Hardcover) 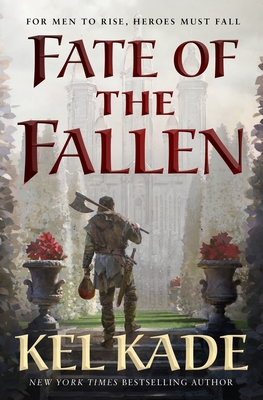 By Kel Kade
$25.99
Click Title for IN STOCK Location

This is book number 1 in the The Shroud of Prophecy series.

Aaslo wanted nothing more than to tend to his forest and marry a pretty girl. Turns out he's fated to be the sidekick of the Chosen One, his best friend, without whom the world is prophesied to die. Then said Chosen One dies. Uh-oh. And that's just by the third chapter.

One thing Aaslo will never do, though, is give up. So he takes up his friend's sword as well as... proof of identity (spoiler alert, it's gross), and works to marshal the world to his side. He only finds help from the most unlikely of places, all up and down the strata of society and even from the world of the gods and afterlife. Along the way, his spirit is beaten and broken; will he save the world, at the expense of himself?

This is the second of two books this year published by Tor that have rent my heart so thoroughly. Read the book, enjoy the journey, love the characters, but if you have even a shred of empathy then after the last page you will need at least a pint of ice cream to sooth the pain.

Fate of the Fallen by Kel Kade is a joy to read. It turns the "chosen one" trope on its head while also featuring complex characters and hilarious dialogue. If you're looking for a book that explores the meaning of fate, destiny, and the resilience of mankind, with some laugh out loud moments, this is the book for you.

Not all stories have happy endings.

Everyone loves Mathias. Naturally, when he discovers it’s his destiny to save the world, he dives in head first, pulling his best friend Aaslo along for the ride.

However, saving the world isn’t as easy, or exciting, as it sounds in the stories. The going gets rough and folks start to believe their best chance for survival is to surrender to the forces of evil, which isn’t how the prophecy goes. At all. As the list of allies grows thin, and the friends find themselves staring death in the face they must decide how to become the heroes they were destined to be or, failing that, how to survive.

Kel Kade lives in Texas and occasionally serves as an adjunct college faculty member, inspiring young minds and introducing them to the fascinating and very real world of geosciences. Thanks to Kade’s enthusiastic readers and the success of the King’s Dark Tidings series, Kade is now able to create universes spanning space and time, develop criminal empires, plot the downfall of tyrannous rulers, and dive into fantastical mysteries full time.


Growing up, Kade lived a military lifestyle of traveling to and living in new places. These experiences with distinctive cultures and geography instilled in Kade a sense of wanderlust and opened a young mind to the knowledge that the Earth is expansive and wild. A deep interest in science, ancient history, cultural anthropology, art, music, languages, and spirituality is evidenced by the diversity and richness of the places and cultures depicted in Kade’s writing.