Berlin: Life and Death in the City at the Center of the World (Hardcover) 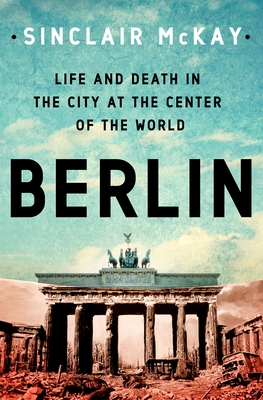 Sinclair McKay's portrait of Berlin from 1919 forward explores the city's broad human history, from the end of the Great War to the Blockade, rise of the Wall, and beyond.

Sinclair McKay's Berlin begins by taking readers back to 1919 when the city emerged from the shadows of the Great War to become an extraordinary by-word for modernity—in art, cinema, architecture, industry, science, and politics. He traces the city’s history through the rise of Hitler and the Battle for Berlin which ended in the final conquest of the city in 1945. It was a key moment in modern world history, but beyond the global repercussions lay thousands of individual stories of agony. From the countless women who endured nightmare ordeals at the hands of the Soviet soldiers to the teenage boys fitted with steel helmets too big for their heads and guns too big for their hands, McKay thrusts readers into the human cataclysm that tore down the modernity of the streets and reduced what was once the most sophisticated city on earth to ruins.

Amid the destruction, a collective instinct was also at work—a determination to restore not just the rhythms of urban life, but also its fierce creativity. In Berlin today, there is a growing and urgent recognition that the testimonies of the ordinary citizens from 1919 forward should be given more prominence. That the housewives, office clerks, factory workers, and exuberant teenagers who witnessed these years of terrifying—and for some, initially exhilarating—transformation should be heard. Today, the exciting, youthful Berlin we see is patterned with echoes that lean back into that terrible vortex. In this new history of Berlin, Sinclair McKay erases the lines between the generations of Berliners, making their voices heard again to create a compelling, living portrait of life in this city that lay at the center of the world.

Sinclair McKay is a features writer for The Telegraph and The Mail on Sunday. He is also the acclaimed author of the bestselling The Secret Life of Bletchley Park and The Fire and the Darkness.

"Great subject, well-researched, brilliantly written. Anyone who wants to understand Berlin's incomparable place at the very center of twentieth century history should begin with Sinclair McKay's remarkable, mesmerizing book."
—Keith Lowe, author of Savage Continent and The Fear and the Freedom

"McKay's powerful imagery and magnetic prose combine to produce an electrifying new account of Berlin. 'You cannot understand the twentieth century without understanding Berlin,' claims the author. He makes a compelling case."
—Julia Boyd, author of Travelers in the Third Reich