Team of Vipers: My 500 Extraordinary Days in the Trump White House (Paperback) 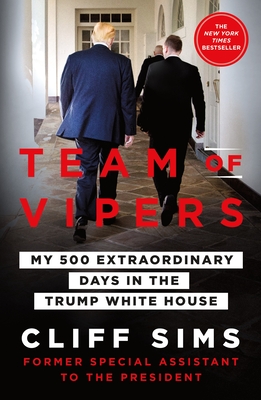 "Sims’s vivid portrait of Trump shrewdly balances admiration with misgivings, and his intricate, engrossing accounts of White House vendettas and power plays have a good mix of immersion and perspective. The result is one of the best of the recent flood of Trump tell-alls." —Publishers Weekly

After standing at Donald Trump’s side on Election Night, Cliff Sims joined him in the West Wing as Special Assistant to the President and Director of White House Message Strategy.

He soon found himself pulled into the President’s inner circle as a confidante, an errand boy, an advisor, a punching bag, and a friend. Sometimes all in the same conversation.

As a result, Sims gained unprecedented access to the President, sitting in on private meetings with key Congressional officials, world leaders, and top White House advisors. He saw how Trump handled the challenges of the office, and he learned from Trump himself how he saw the world.

For five hundred days, Sims also witnessed first-hand the infighting and leaking, the anger, joy, and recriminations. He had a role in some of the President’s biggest successes, and he shared the blame for some of his administration’s worst disasters. He gained key, often surprising insights into the players of the Trump West Wing, from Jared Kushner and John Kelly to Steve Bannon and Kellyanne Conway.

He even helped Trump craft his enemies list, knowing who was loyal and who was not.

And he took notes. Hundreds of pages of notes. In real-time.

Sims stood with the President in the eye of the storm raging around him, and now he tells the story that no one else has written—because no one else could. The story of what it was really like in the West Wing as a member of the President’s team. The story of power and palace intrigue, backstabbing and bold victories, as well as painful moral compromises, occasionally with yourself.

Team of Vipers tells the full story, as only a true insider could.

CLIFF SIMS was the CEO of Yellowhammer Multimedia, Alabama’s premiere source for political news, until he joined the Trump campaign in August 2016. After the election, he moved from Trump Tower to the West Wing, where he crafted the White House’s messaging. He's now the president of Telegraph Creative, a full-service creative shop and digital transformation firm. He lives with his wife and dog in Birmingham, Alabama.

"Sims’ book makes much of infighting among White House staff. “The whole thing felt like Game of Thrones, but with the characters from Veep,” writes Sims" —Axios

"What is most memorable about Team of Vipers is the joylessness of working for this president and the acrid aftertaste it leaves." —The Guardian

"But like other accounts of the Trump White House written by former staff members or journalists, the narrative and anecdotes support much of the real-time reporting about the administration. Mr. Sims also writes that leaks by various staff members have been in service of creating specific portraits of events or undermining rivals. They have not always portrayed the full truth, he suggests." —The New York Times

"Sims, who enjoyed uncommon personal access to Trump, recounts expletive-filled scenes of chaos, dysfunction and duplicity among the president, his family members and administration officials. Unlike memoirs of other Trump officials, Sims’s book is neither a sycophantic portrayal of the president nor a blistering account written to settle scores." —The Washington Post