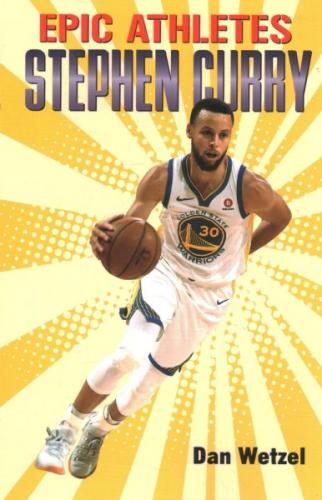 This is book number 1 in the Epic Athletes series.

When you think of Stephen Curry, one word comes to mind: greatness. From shooting three-pointers with laser precision to his clutch ability to hit buzzer-beaters time and again, he has established himself as one of the best players in pro basketball.

But greatness was never a guarantee for Steph. The son of a talented NBA player, he dreamed of one day playing professionally just like his dad. Yet Steph, who was always smaller and weaker than the competition, was told over and over that he would never be talented enough to be a college star or NBA player--let alone the MVP of the entire league. Through tenacity and hard work, he proved them all wrong and went on to dismantle the record books.

With the high energy of a TV commentator, and featuring dynamic comic-style illustrations, this engaging biography tells the story of an NBA All-Star and the path he took to achieve his dreams.

* "Wetzel knows how to organize the facts and tell a good story. . . an unusually informative and enjoyable sports biography for young readers." —Booklist (starred review)

"Wetzel knows how to organize the facts and tell a good story. His insights into high school, collegiate, and professional basketball, along with his use of well-chosen quotes from insiders, make this book an unusually informative and enjoyable sports biography for young readers." —Booklist, starred review