Beyond the Sand and Sea: One Family's Quest for a Country to Call Home (Hardcover) 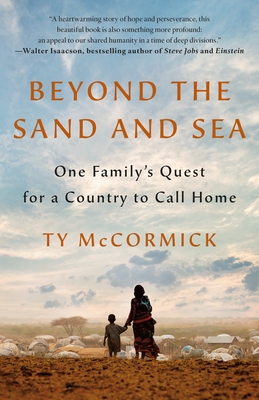 From Ty McCormick, winner of the Robert F. Kennedy Journalism Award, an epic and timeless story of a family in search of safety, security, and a place to call home.

When Asad Hussein was growing up in the world’s largest refugee camp, nearly every aspect of life revolved around getting to America—a distant land where anything was possible. Thousands of displaced families like his were whisked away to the United States in the mid-2000s, leaving the dusty encampment in northeastern Kenya for new lives in suburban America. When Asad was nine, his older sister Maryan was resettled in Arizona, but Asad, his parents, and his other siblings were left behind. In the years they waited to join her, Asad found refuge in dog-eared novels donated by American charities, many of them written by immigrants who had come to the United States from poor and war-torn countries. Maryan nourished his dreams of someday writing such novels, but it would be another fourteen years before he set foot in America.

The story of Asad, Maryan, and their family’s escape from Dadaab refugee camp is one of perseverance in the face of overwhelming adversity. It is also a story of happenstance, of long odds and impossibly good luck, and of uncommon generosity. In a world where too many young men are forced to make dangerous sea crossings in search of work, are recruited into extremist groups, and die at the hands of brutal security forces, Asad not only made it to the United States to join Maryan, but won a scholarship to study literature at Princeton—the first person born in Dadaab ever admitted to the prestigious university.

Beyond the Sand and Sea is an extraordinary and inspiring book for anyone searching for pinpricks of light in the darkness. Meticulously reported over three years, it reveals the strength of a family of Somali refugees who never lost faith in America—and exposes the broken refugee resettlement system that kept that family trapped for more than two decades and has turned millions into permanent exiles.

TY McCORMICK is a senior editor at Foreign Affairs and a former foreign correspondent who has written for The New York Times, The Washington Post, Newsweek, and National Geographic. From 2015 to 2018, he was based in Nairobi, Kenya, as Africa editor of Foreign Policy magazine, where he led a team of writers that won a Robert F. Kennedy Journalism Award for a series on African migration. He has reported from more than a dozen countries in Africa and the Middle East.

“A heartwarming story of hope and perseverance, this beautiful book is also something more profound: an appeal to our shared humanity in a time of deep divisions.” —Walter Isaacson, bestselling author of Steve Jobs and Einstein

"Beyond the Sand and Sea is a remarkable act of storytelling: lucid reporting and writing and rigorous world-building. It is a stunningly intimate portrayal of lives spent in waiting, and the ways those lives can transform because of luck, perseverance, and compassion." —Alexis Okeowo, New Yorker staff writer and PEN Open Book Award-winning author of A Moonless Starless Night: Ordinary Women and Men Fighting Extremism in Africa

“A compelling account of the horrors of war and the interrupted lives of refugees. Delightfully and powerfully written, Beyond the Sand and Sea offers readers a unique window into the lives of the displaced, revealing the richness, complexity, and quiet heroism of human experiences too often rendered as statistics.” —His Excellency Hassan Sheikh Mohamud, former President of Somalia

“I started reading Ty McCormick's book one evening, and I didn't put it down until I'd reached the last page. Every abstract discussion about ‘resilience’ and ‘opportunity,’ as well as ‘American inclusion’ and ‘the plight of global refugees,’ will have a new vividness for those who have, in these pages, met Asad, Maryan, and the other main figures in this book.” —James Fallows, winner of the National Book Award and bestselling author of Our Towns: A 100,000-Mile Journey Into the Heart of America

“Written and reported with precision and deep humanity, this timely and important book paints a moving portrait of the complicated lives of the stateless and dispossessed…Ty McCormick reaffirms our faith in the power of a singular dream and the love of family to sustain a beautiful mind in one of the bleakest refugee camps in the world.” —Hassan Ghedi Santur, author of The Youth of God and Maps of Exile

“Captivating and uplifting, this story of hardship, survival, and redemption makes us understand why immigration is the best promise of the American Dream.” —Kai Bird, Pulitzer Prize-winning historian and director of the Leon Levy Center for Biography at City University of New York’s Graduate Center

“A powerful and timely look at the human stories behind the headlines on war, migration and loss. I couldn’t put this book down!” —Nanjala Nyabola, author of Traveling While Black and Digital Democracy, Analogue Politics: How the Internet Is Transforming Kenya

“I've never read a book which so poignantly conveys the gritty reality of life as a refugee, with its agonizing oscillation between hope and despair. Beautifully written, Beyond the Sand and Sea is like a sheet of glass, with McCormick granting the reader intimate access to Asad, Maryan, their siblings and parents' predicaments without feeling the need to impose himself upon the story. What results is an elegant, limpid, and utterly persuasive account.” —Michela Wrong, author of Do Not Disturb: The Story of a Political Murder and an African Regime Gone Bad and It's Our Turn to Eat: The Story of a Kenyan Whistle-Blower

"Beyond the Sand and Sea is the deeply reported, beautifully written story of exiles abandoned by the outside world who insisted on their own humanity. Ty McCormick brings you so close to his subject that the struggle of Asad and his family to reach America becomes a universal tale of yearning, determination, injustice, and love." —George Packer, winner of the National Book Award and author of The Unwinding and Our Man

“Foreign correspondent McCormick, an editor at Foreign Affairs, makes his book debut with a riveting narrative of the plight of refugees...An intimate and rigorously reported portrait of desperate lives.” —Kirkus (starred review)

“McCormick’s book offers rare insight into the extreme difficulties with which some people live and the amazing ability that some of them show to dream and persist, even when the odds are slim and success presents challenges of its own.” —Simon Turner, Foreign Affairs

"A heart-wrenching story that chronicles the life of a Somali family trapped in a seemingly endless state of statelessness...McCormick’s book is a call for greater empathy for those refugees who fall short of the unrealistic expectation of living up to standards of the 'good refugee' and the need for those living in wealthy Western nations to critically assess what they mean when they describe their societies as just and fair. Ultimately, it is a call for readers to allow sometimes broken people the space to grow and make mistakes as they reckon with years and sometimes generations of pent-up trauma and disadvantage." —Abdullahi Alim, Foreign Policy

“Don’t pass up a chance to be thrilled. If you need a book that’ll make you stand up and cheer, Beyond the Sand and Sea is just the ticket." —Terri Schlichenmeyer, The Philadelphia Tribune

“Well-researched and beautifully depicted, blending objective facts with emotional moments that are both heartbreaking and inspiring. It’s a testament to McCormick’s expertise: he reported extensively on African migration in his former position with Foreign Policy magazine and is skilled in the style of his trade...McCormick’s unique style...combines linguistic austerity with imaginative descriptions.” —Kristen Schott, Los Angeles Review of Books

“McCormick['s]...writing is beautiful and makes it easy to become engaged...This is no simple success story, but that makes it even more important to read.” —Sally Hayden, The Irish Times