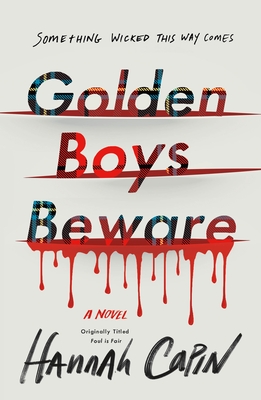 For the girls who have had enough – Hannah Capin’s Golden Boys Beware, originally published as Foul is Fair, is the bloody, thrilling revenge fantasy that reimagines Lady Macbeth’s story for the modern day.

Jade and her friends Jenny, Mads, and Summer rule their glittering LA circle. Untouchable, they have the kind of power other girls only dream of. Every party is theirs and the world is at their feet. Until the night of Jade's sweet sixteen, when they crash a St. Andrew’s Prep party. The night the golden boys choose Jade as their next target.

They picked the wrong girl.

Sworn to vengeance, Jade transfers to St. Andrew’s. She plots to destroy each boy, one by one. She'll take their power, their lives, and their control of the prep school's hierarchy. And she and her coven have the perfect way in: a boy named Mack, whose ambition could turn deadly.

Hannah Capin is the author of Golden Boys Beware (originally published as Foul is Fair) and The Dead Queens Club. She lives in Tidewater Virginia.

"A ferocious, frenzied reaction to a world that has, for too long, treated women as collateral damage in stories that have been deemed more important than theirs...Jade’s first-person narrative, steeped in rage and drenched, unapologetically, with gore, moves at a relentless pace." - Booklist (Starred Review)

"This revenge fantasy is as brutal as it is beautiful...An absolutely gorgeous retelling, artistry on every page, Oscar-worthy if it were a film." - NPR.org

"Capin’s writing will seduce you with its beauty and then, when you least suspect it, slice you to the bone—just like Foul is Fair’s captivating, vicious, entirely unforgettable heroine, Jade." - Layne Fargo, author of Temper and co-host of Unlikeable Female Characters Podcast

"Fierce, vicious, and electric. If books had teeth, Foul Is Fair would have fangs. Capin's language glitters dark and her writing cuts deep. Revenge is a dish best served by this deliciously unapologetic coven." - Laurie Elizabeth Flynn, author of Firsts and Last Girl Lied To

“Foul is Fair is a clever reimagining of Macbeth centering a teenage Lady M. It’s a dark, brutal revenge fantasy, sharply feminist and brimming with melodic prose. Capin’s sophomore novel is bloody brilliant—exceedingly bloody, and every bit as brilliant.” - Dana Mele, author of People Like Us