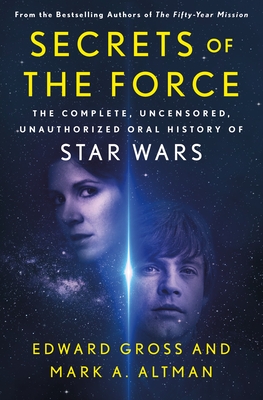 From the authors of The Fifty-Year Mission and So Say We All, comes the first and only comprehensive oral history of the Star Wars movie franchise.

For the past four decades, no film saga has touched the world in the way that Star Wars has, capturing the imaginations of filmgoers and filmmakers alike. Now, for the first time ever, Edward Gross and Mark A. Altman, the bestselling authors of The Fifty-Year Mission, are telling the entire story of this blockbuster franchise from the very beginning in a single exhaustive volume. Featuring the commentaries of hundreds of actors and filmmakers involved with and impacted by Star Wars, as well as writers, commentators, critics, executives, authors, film historians, toy experts and many more, Secrets of the Force, will reveal all in Altman and Gross’s critically acclaimed oral history format from the birth of the original film through the latest sequels and the new televisions series.

EDWARD GROSS has an extensive history of covering film and television as a member of the editorial staff of a wide variety of magazines, including CINESCAPE, STARLOG, CINEFANTASTIQUE, SFX, FEMME FATALES, MOVIE MAGIC, LIFE STORY and SCI-FI NOW. He has written numerous non-fiction books and, along with THE FIFTY-YEAR MISSION coauthor Mark Altman, has written more about Star Trek over the past 35 years than just about anyone else.

MARK A. ALTMAN has been hailed as "the world's foremost Trekspert" by the LOS ANGELES TIMES. Altman is a former journalist for such publications as THE BOSTON GLOBE, CINEFANTASTIQUE and GEEK. He is also the writer/producer of the beloved romantic comedy, FREE ENTERPRISE, starring William Shatner and Eric McCormack as well as the hit TV series AGENT X, CASTLE, NECESSARY ROUGHNESS and FEMME FATALES.

"A trove for hardcore fans. If you’re obsessive about the films, there’s no end to the fun." —Kirkus Reviews

"In an engrossing oral history, creatives from the Star Wars franchise discuss their experiences in bringing the groundbreaking saga to the screen." —Shelf Awareness

“Secrets of the Force is meticulous, detailed and utterly fascinating.” —The Nerd Daily Review