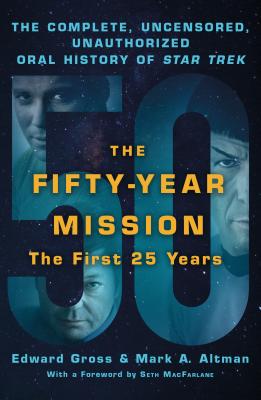 By Edward Gross, Mark A. Altman
$21.99
Click Title for IN STOCK Location

Volume one of a fifty-year oral history of Star Trek by the people who were there, in their own words, sharing never-before-told stories.

This is the unauthorized, uncensored and unbelievable true story behind the making of a pop culture phenomenon. The original Star Trek series debuted in 1966 and has spawned five TV series spin-offs and a dozen feature films. The Fifty-Year Mission is a no-holds-barred oral history of five decades of Star Trek, told by the people who were there. Hear from the hundreds of television and film executives, programmers, writers, creators and cast as they unveil the oftentimes shocking story of Star Trek's ongoing fifty-year mission -a mission that has spanned from the classic series to the animated show, the many attempts at a relaunch through the beloved feature films.

Make no mistake, this isn't just a book for Star Trek fans. Here is a volume for all fans of pop culture and anyone interested in the nuts and bolts of a television touchstone.

EDWARD GROSS has an extensive history of covering film and television as a member of the editorial staff of a wide variety of magazines, including CINESCAPE, STARLOG, CINEFANTASTIQUE, SFX, FEMME FATALES, MOVIE MAGIC, LIFE STORY and SCI-FI NOW. He has written numerous non-fiction books and, along with THE FIFTY-YEAR MISSION coauthor Mark Altman, has written more about Star Trek over the past 35 years than just about anyone else.

MARK A. ALTMAN has been hailed as "the world's foremost Trekspert" by the LOS ANGELES TIMES. Altman is a former journalist for such publications as THE BOSTON GLOBE, CINEFANTASTIQUE and GEEK. He is also the writer/producer of the beloved romantic comedy, FREE ENTERPRISE, starring William Shatner and Eric McCormack as well as the hit TV series AGENT X, CASTLE, NECESSARY ROUGHNESS and FEMME FATALES.

“Breathtaking in scope and depth, this is a must-read for Star Trek lovers as well as anyone who wants a better understanding of how television and film production works.” —Booklist, starred review

“An absolute must for any Star Trek fan.” —Kirkus Reviews

“As a lifelong fan, I thought I knew everything there was to know about Star Trek. Thankfully, I was wrong. Thanks to revealing, honest and — dare I say it? — fascinating interviews from the insiders who were really there, The Fifty-Year Mission is an epic tome that's full of so much fantastic information, I felt like I was discovering the incredible behind-the-scenes story of Star Trek (and Hollywood, for that matter) all over again. It's a page-turner in every sense of the word, and I could not put it down.” —Scott Mantz, Access Hollywood