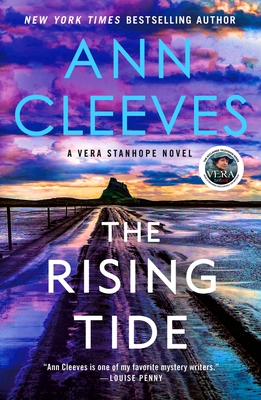 This is book number 10 in the Vera Stanhope series.

“Sorry, pet, it’s murder.”
In Ann Cleeves 10th installment of the DCI Vera Stanhope series, Vera confronts aging, a loveless childhood, petty impulse to lord her substantial abilities above her lesser employees all while solving a murder amongst friends on a remote island. A great winter read. — Kevin Philbin

From Ann Cleeves—New York Times bestselling and award-winning author of the Vera and Shetland series, both of which are hit TV shows—comes the stunning tenth Vera Stanhope novel, The Rising Tide, a powerful novel about guilt, betrayal, and the longheld secrets people keep.

"Ann Cleeves is one of my favorite mystery writers."—Louise Penny

For fifty years a group of friends have been meeting regularly for reunions on Holy Island, celebrating the school trip where they met, and the friend that they lost to the rising causeway tide five years later. Now, when one of them is found hanged, Vera is called in. Learning that the dead man had recently been fired after misconduct allegations, Vera knows she must discover what the friends are hiding, and whether the events of many years before could have led to murder then, and now . . .

But with the tide rising, secrets long-hidden are finding their way to the surface, and Vera and the team may find themselves in more danger than they could have believed possible . . .

“A friend of mine once joked that the work of Ann Cleeves is the closest the crime-fiction genre comes to evoking ASMR — the euphoric, pleasant, spine-tingling sensation that’s all the rage on YouTube. The books never get too dark, never venture too far into dangerous territory, but aren’t outright cozy, either…. This is the work of a pro — a diverting, solidly crafted mystery that’s guaranteed to entertain.”—New York Times Book Review

"Vera…roots her way to the truth with the charm of a next-door neighbor and the steely resolve of an army general.”—The Wall Street Journal

“What a pleasure to be back in the hands of Ann Cleeves… it is a joy to watch a writer as skilful as Cleeves lay out her version of a locked room mystery. As ever, Cleeves goes deeper, examining the precarious nature of life and what it is to age and face your own mortality. I’m still absolutely reeling…”—The Guardian

“As she always has, Ann Cleeves really grabbed my attention with her latest book, The Rising Tide. And didn’t let go... Vera Stanhope is one of the literary world’s most realistic detectives… This just might be my favorite Vera book, at least thus far.”—Free-Lance Star

"The Rising Tide picked up the pace dramatically as it headed for a crashing conclusion. Eager to ID the killer and find out why early reviewers were commenting as they were, I turned to the book for the final chapters. That’s the definition of a page turner."—St. Louis Post-Dispatch

"A thrilling tale with an ending that catches you by surprise, it’s a story both newbies to Vera and diehard fans will enjoy. 9/10"—The Independent

"A character-driven puzzle that ends in a painful denouement."—Kirkus (Starred)

"The engrossing plot delves into the friends' reminiscences, which seem innocuous but possess an underlying menace. Vera--blunt, intelligent, frumpy and obsessive yet deeply affectionate toward her team--continues to prove her investigative mettle. A visit with Vera--whether in the series or via the television adaptation, now in its 11th season--is always welcome."—Oline Cogdill, Shelf Awareness

Praise for The Darkest Evening:

"Who doesn’t love “large and shabby” Vera Stanhope, the blunt detective in Ann Cleeves’s Northumberland police procedurals? She is already one of the genre immortals."—The New York Times

"Superb . . . This fair-play mystery brims with fully developed suspects and motives that are hidden in plain sight. Skillful misdirection masks the killer’s identity. This page-turner is must reading for fans as well as newcomers."—Publishers Weekly (starred)

"Fans will enjoy matching wits with Cleeves’ eccentric sleuth right up to the dangerous surprise in her denouement."—Kirkus

"Cleeves has a fine time constructing a clockwork murder plot...Loneliness plays both sides of the aisle here, afflicting both Vera and the murderer she hunts."—Booklist

“The Darkest Evening reminds us that the novels are richer, fuller, and more satisfying than any episode of television can be…[Cleeves] is a master of the genre and if anything has gained a step over the years.”—St. Louis Post-Dispatch

“The suspense in this complex, extremely well-written mystery is as mesmerizing as the landscape.”—Free-Lance Star