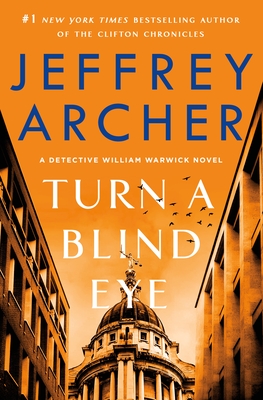 This is book number 3 in the William Warwick Novels series.

Turn a Blind Eye is the third installment in the gripping story of Detective Inspector William Warwick, by the master storyteller and #1 New York Times bestselling author of the Clifton Chronicles.

Newly promoted to Detective Inspector, William Warwick is tasked with a dangerous new line of work, to go undercover and expose crime of another kind: corruption at the heart of the Metropolitan Police Force. Along with detectives Rebecca Pankhurst and Nicky Bailey, his team is focused on following Detective Jerry Summers, a young officer whose lifestyle exceeds his income. But the investigation risks being compromised when Nicky falls for Summers.
Meanwhile, notorious drug baron Ahmed Rashidi goes on trial, defended by Booth Watson QC, while William’s father Sir Julian and sister Grace lead the prosecution case. And William’s wife Beth, now a new mother to twins, makes a surprising new friend in Christina Faulkner—the ex-wife of William’s former rival, criminal financier Miles - who has not only turned over a new leaf, but also has a new-found source of income when Faulkner dies suddenly of a heart attack and she stands to be sole inheritor of his estate.
As the undercover officers start to draw the threads together, William realizes that the corruption may go deeper still, and more of his colleagues than he first thought might be willing to turn a blind eye.

JEFFREY ARCHER was educated at Oxford University. He served five years as a Member of Parliament in the House of Commons and has served twenty-seven years as a Member of the House of Lords. Now published in 97 countries and more than 37 languages, all of his novels and short story collections—including Kane & Abel, Only Time Will Tell and This Was a Man—have been international bestsellers. Jeffrey is married with two sons and three grandchildren, and lives in London, Cambridge and Majorca.

Praise for Nothing Ventured, the launch of the series

"An expert juggling act that ends with not one but two intercut trials. More, please." —Kirkus Reviews

"A fully realized character, the intelligent Warwick is ambitious but naive with a lot to learn. He’s surrounded by a distinctive cast of family, colleagues, and villains, while a well-placed romantic situation fills out a near-perfect hand. The final section dealing with dueling courtroom dramas brings genuine suspense to a relatively bloodless, but thoroughly gripping, tale. Archer reinforces his position as a master storyteller.” —Publishers Weekly

"Archer has a real gift for family sagas, and here, with Warwick, he’s launching what promises to be a series just as riveting as the Clifton Chronicles . . . Readers who know Warwick from the Chronicles will be interested to learn more about him (such as exactly how he acquired the nemesis who haunts his every move later in his career), but previous knowledge of the character is certainly not necessary to enjoy this first in what we hope will be a long series.” —Booklist

"A story that builds in intensity . . . Archer’s numerous fans will appreciate another dramatic, character-driven mystery set in the world of art, police work, and court trials.” —Library Journal (starred review)