108 Stitches: Loose Threads, Ripping Yarns, and the Darndest Characters from My Time in the Game (Hardcover) 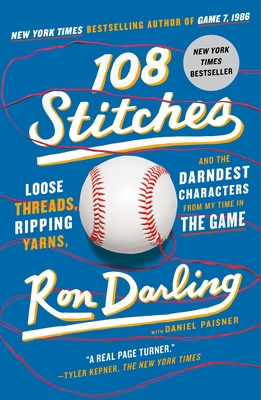 By Ron Darling
$29.99
Click Title for IN STOCK Location

Just in time for baseball season, this is a wild ride through baseball history. Ron Darling weaves his way through America's Pastime playing a bit of Six Degrees of Separation, often including personal anecdotes of players he crossed paths with during his time in the majors. With its quick, digestible chapters, this is the perfect book for reading in between innings or during those 7th inning stretches.

This is New York Times bestselling author and Emmy-nominated broadcaster Ron Darling's 108 baseball anecdotes that connect America’s game to the men who played it.

In 108 Stitches, New York Times bestselling author and Emmy Award-winning broadcaster Ron Darling offers his own take on the "six degrees of separation" game and knits together wild, wise, and wistful stories reflecting the full arc of a life in and around our national pastime.

Like the 108 stitches on a baseball, Darling's experiences are interwoven with every athlete who has ever played, every coach or manager who ever sat in a dugout, and every fan who ever played hooky from work or school to sit in the bleachers for a day game.

Darling's anecdotes come together to tell the story of his time in the game, and the story of the game itself.

Ron Darling is a New York Times bestselling author and Emmy Award-winning baseball analyst for TBS, the MLB Network, SNY, and WPIX-TV, and author of The Complete Game. He was a starting pitcher for the New York Mets from 1983 to 1991 and the first Mets pitcher to be awarded a Gold Glove.

"A Real Page turner.... memorable for the whimsical, breezy tidbits that add texture to some well-known characters he has known in a long, honorable career in baseball." —Tyler Kepner, The New York Times

"Baseball journalist, broadcaster, and former Mets pitcher Darling shows his deep love of the sport and the personalities that drive it in this collection of colorful anecdotes...This entertaining insider volume is sure to please baseball enthusiasts." —Publishers Weekly