The Seventh Function of Language: A Novel (Paperback) 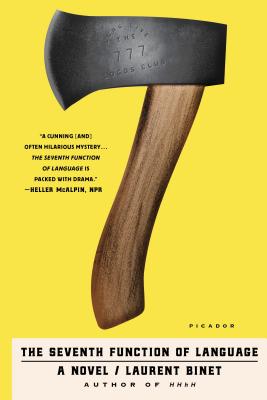 I haven't enjoyed a book to this extent in a while. Not only funny, but clever, this detective story that all of modern philosophy both rewards the intellectual snob and pokes fun like a needle at their aloof, inflated, balloon-like ego. A delight for anyone whose humor lies along the lines of "Existential Comics".

From the prizewinning author of HHhH, “the most insolent novel of the year” (L’Express) comes a romp through the French intelligentsia of the twentieth century.

Paris, 1980. The literary critic Roland Barthes dies—struck by a laundry van—after lunch with the presidential candidate François Mitterand. The world of letters mourns a tragic accident. But what if it wasn’t an accident at all? What if Barthes was . . . murdered?

In The Seventh Function of Language, Laurent Binet spins a madcap secret history of the French intelligentsia, starring such luminaries as Jacques Derrida, Umberto Eco, Gilles Deleuze, Michel Foucault, Judith Butler, and Julia Kristeva—as well as the hapless police detective Jacques Bayard, whose new case will plunge him into the depths of literary theory (starting with the French version of Roland Barthes for Dummies). Soon Bayard finds himself in search of a lost manuscript by the linguist Roman Jakobson on the mysterious “seventh function of language.”

Laurent Binet was born in Paris, France, in 1972. His first novel, HHhH, was named one of the fifty best books of 2015 by The New York Times and received the Prix Goncourt du Premier Roman. He is a professor at the University of Paris III, where he lectures on French literature. His other novels include The Seventh Function of Language and Civilizations.

Sam Taylor has written for The Guardian, Financial Times, Vogue and Esquire, and has translated such works as the award-winning HHhH by Laurent Binet, and the internationally-bestselling The Truth about the Harry Quebert Affair by Joël Dicker.

"No small pleasure is to be had from the amusing, sometimes scabrous, satirical portraiture of illustrious figures . . . It is as if a roman policier has collided with the kind of campus novel Kingsley Amis would have written had he been of the generation and temperament to read Derrida's Of Grammatology. On its surface [The Seventh Function of Language is] a romp, then, a burlesque set in a time when literary theory was at its cultural zenith; knowing, antic, amusingly disrespectful and increasingly zany as it goes on . . ." --Nicholas Dames, The New York Times Book Review

"A cunning, often hilarious mystery for the Mensa set and fans of Umberto Eco's The Name of the Rose and Tom Stoppard's Arcadia . . . In addition to some challenging thickets of language theory, the novel is packed with drama — car chases, mutilations, suicide, graphic sex, and multiple murders . . . Sam Taylor's deft translation encompasses heavy linguistic exegeses, political discussions, oratory duels, and even some puns, including echo and Eco . . ." —Heller McAlpin, NPR

“An affectionate send-up of an Umberto Eco–style intellectual thriller that doubles as an exemplar of the genre, filled with suspense, elaborate conspiracies, and exotic locales.” —Esquire

"[Binet] ups the metafictional ante with The Seventh Function of Language . . . This novel is alive with the potential signifiers lurking behind language . . . A charming roman à clef like no other . . . [A] loving inquiry into 20th-century intellectual history that seamlessly folds historical moments . . . into a brilliant illustration of the possibilities left to the modern novel." —Publishers Weekly (boxed and starred review)

"Binet's second novel is at once a mystery and a satire of mysteries . . . A clever and surprisingly action-packed attempt to merge abstruse theory and crime drama." —Kirkus Reviews