The Seabird's Cry: The Lives and Loves of the Planet's Great Ocean Voyagers (Paperback) 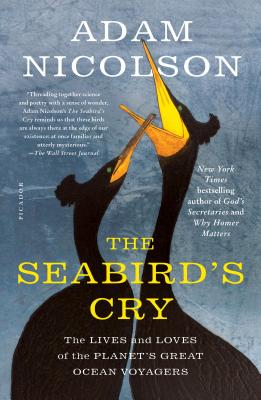 A wonderfully written and accessible book, that covers the lives of many sea birds; fulmar, puffin, guillemots, for example. We are introduced to the rich lives these birds lead, the way they feed, play, socialize, and their relationships with each other and their watery world. Nicolson voices the cry of our ocean birds to their plight, and dwindling numbers. This is a beautiful book, but also a brutal one, revealing all the ways we are harming our wildlife, whether deliberately, or by way of apathy.

Enter ancient lands of wind and waves where the planet’s greatest flyers battle for survival.

As the only creatures at home on land, at sea, and in the air, seabirds have evolved to thrive in the most demanding environment on Earth.

In The Seabird’s Cry, Adam Nicolson travels ocean paths, fusing traditional knowledge with astonishing facts science has recently learned about these creatures: the way their bodies actually work, their dazzling navigational skills, their ability to smell their way to fish or home and to understand the discipline of the winds upon which they depend.

This book is a paean to the beauty of life on the wing, but, even as we are coming to understand the seabirds, a global tragedy is unfolding. Their numbers are in freefall, dropping by nearly 70 percent in the last sixty years, a billion fewer now than in 1950. Extinction stalks the ocean, and there is a danger that the hundred-million-year-old cries of a seabird colony, rolling around in the bays and headlands of high latitudes, will this century become but a memory.

A New York Times bestselling author, Adam Nicolson has won many major awards including the Somerset Maugham Award, the W. H. Heinemann Award, and the Ondaatje Prize. His books include Why Homer Matters and The Seabrid's Cry.

Mr. Nicolson lives in England with his wife and grown children.

“Threading together science and poetry with a sense of wonder, Adam Nicolson’s The Seabird’s Cry reminds us that these birds are always there at the edge of our existence: at once familiar and utterly mysterious . . . The elegance of the writing, and the very human curiosity and compassion for the seabirds themselves, is enthralling . . . A sustained and powerful cry for a greater understanding and empathy of their unique environments.” —The Wall Street Journal

“Wondrous and lyrical, this book swoops and dives into the art and science of natural history with as much grace as the seabirds it examines.”—The Boston Globe (a Best Book of 2018)

“Beautifully written, haunting in imagery and filled with marvels, the book is also a farewell salute to a once teeming dimension of the natural world, now increasingly devastated by human environmental malfeasance.”—Star Tribune (Critics' Choice, Top 10 of 2018)

“Breathtaking . . . Nicolson’s mind is well stocked and acrobatic, and capable of vivid connections . . . He has an intuitive understanding of the birds that feels almost uncanny . . . His gift is to present this research in a way that is not just comprehensible but compelling, even moving, and to intercut it with dazzling description . . . His swithering between the forensic and the poetic creates a sense of wonder.” —The Spectator

“With scientific rigor and a poet’s sense of wonder, Nicolson uncovers the lives of puffins and kittiwakes, fulmars and gulls, all the while investigating the impact of climate change on these seabirds.” —The American Scholar

“Captivating . . . A celebration of these strange and marvelous beings and the forbidding places they call home.” —The Christian Science Monitor

“Intimate and engrossing . . . A buoyant celebration of seabirds that serves as an important reminder of nature’s fragility.” —Kirkus Reviews

“An extraordinary hymn to threatened seabirds that breaks down the barriers separating science and poetry . . . Evocative . . . Luminous . . . Nicolson spools outwards from the Shiants, building in the reader’s mind a richly interconnected world of birds on their cliffs and crags, or gliding over endless oceans, all of it described in the most lustrous, lucid prose. I filled the back of the book with quotes I copied down, little sparks of recognition and delight.” —Financial Times

“A moving exploration . . . Demonstrates that wonder about the natural world can be deepened by increasing one’s knowledge of it and that emotional wisdom can be reinforced by the acquisition of practical information. He blends insightful ethological observations with elements of the mythical and peppers his delivery of practical, premodern knowledge with poetic imagery . . . whimsical . . . appeals to both the mind and the heart . . . Nicolson combines a huge amount of scientific information with deeply emotional content and the net effect is moving and quietly profound.” —Publishers Weekly (starred review)

“The Seabird’s Cry . . . is full of wonder and guilt, life and death; it is a threnody sounding from cliff to cliff . . . dizzyingly, dazzlingly good.” —The Herald Scotland

“This isn’t just about ‘seabirds.’ It’s about the living poetry of winged beings who share our planet as though inhabiting another world.” —Carl Safina, author of Song for the Blue Ocean and Beyond Words.

“This marvellous book inhabits with graceful ease both the mythic and the scientific, and remains alert to the vulnerability of these birds as well as to their wonder. It is a work that takes wing in the mind.” —Robert Macfarlane, award-winning author of Landmarks, The Wild Places, and Mountains of the Mind

“The Seabird’s Cry is a magnificent book and takes its place all at once among the greatest of modern bird books; page after page of extraordinary power, amazing mastery of the science, scintillating and muscled retelling of countless maps and graphs, Nicolson has got the truth better even than those who dug it up; an imaginative reach and original inhabiting of what he has seen, the birds themselves; so enamoured of life it makes you cry; so big with the bigness it finds; and quite wonderful; no one else is doing this or has; it is utterly brilliant.” —Tim Dee, author of The Running Sky and Poetry for Birds