Most Dangerous: Daniel Ellsberg and the Secret History of the Vietnam War (Paperback) 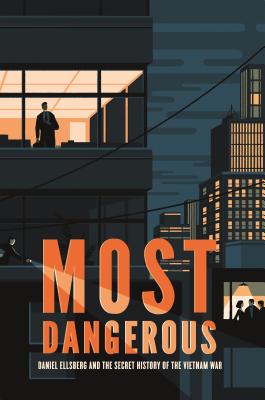 This is nonfiction that reads like a spy thriller. Already nominated for the National Book Award, this account for middle and high school readers of the Viet Nam war, Daniel Ellsberg, and the Pentagon Papers is meticulously researched, beautifully written, and impossible to put down. — Jennifer Armstrong

Most Dangerous: Daniel Ellsberg and the Secret History of the Vietnam War is New York Times bestselling author Steve Sheinkin's award-winning nonfiction account of an ordinary man who wielded the most dangerous weapon: the truth.

In 1964, Daniel Ellsberg was a U.S. government analyst, helping to plan a war in Vietnam. It was the height of the Cold War, and the government would do anything to stop the spread of communism—with or without the consent of the American people.

As the fighting in Vietnam escalated, Ellsberg turned against the war. He had access a top-secret government report known as the Pentagon Papers, and he knew it could blow the lid off of years of government lies. But did he have the right to expose decades of presidential secrets? And what would happen to him if he did it?

A lively book that interrogates the meanings of patriotism, freedom, and integrity, the National Book Award finalist Most Dangerous further establishes Steve Sheinkin—author of Newbery Honor book Bomb as a leader in children's nonfiction.

This thoroughly-researched and documented book can be worked into multiple aspects of the common core curriculum.

“A master of fast-paced histories...[this] is Sheinkin’s most compelling one yet. ”—Washington Post

Steve Sheinkin is the acclaimed author of fast-paced, cinematic nonfiction histories, including Fallout, Undefeated, Born to Fly, The Port Chicago 50, and Bomb. His accolades include a Newbery Honor, three Boston Globe–Horn Book Awards, a Sibert Medal and Honor, and three National Book Award finalist honors. He lives in Saratoga Springs, New York, with his wife and two children.

“Sheinkin has done again what he does so well: condense mountains of research into a concise, accessible, and riveting account of history. . . [This book] will keep readers racing forward.” —Publishers Weekly, starred review

"Immediate and compelling . . . Here, [Sheinkin] has outdone even himself." —The Horn Book, starred review

"A thrilling ride."—Bulletin of the Center for Children's Books, starred review

"Young people in the United States are growing up in a vastly changed world, one where endless war and all-pervasive surveillance is a matter of course. 'Most Dangerous' will help them understand how it has become so." —The New York Times Book Review