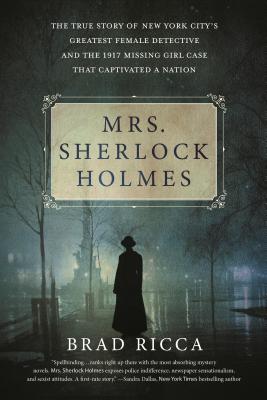 Nominated for the Edgar Award for Best Fact Crime!

This is the shocking and amazing true story of the first female U.S. District Attorney and traveling detective who found missing 18-year-old Ruth Cruger when the entire NYPD had given up.

Mrs. Sherlock Holmes tells the true story of Grace Humiston, the lawyer, detective, and first woman U.S. District Attorney who turned her back on New York society life to become one of the nation's greatest crime-fighters during an era when women were still not allowed to vote. After agreeing to take the sensational case of missing eighteen-year-old Ruth Cruger, Grace and her partner, the hard-boiled detective Julius J. Kron, navigated a dangerous web of secret boyfriends, two-faced cops, underground tunnels, rumors of white slavery, and a mysterious pale man, in a desperate race against time.

Brad Ricca's Mrs. Sherlock Holmes is the first-ever narrative biography of this singular woman the press nicknamed after fiction's greatest detective. Her poignant story reveals important clues about missing girls, the media, and the real truth of crime stories.

Mrs. Sherlock Holmes is a nominee for the 2018 Edgar Awards for Best Fact Crime.

BRAD RICCA earned his Ph.D. in English from Case Western Reserve University where he currently teaches. The author of Super Boys, he has spoken on comics at various schools and museums, and he has been interviewed about comics topics by The New York Daily News, The Wall Street Journal, and All Things Considered on NPR. His film Last Son won a 2010 Silver Ace Award at the Las Vegas International Film Festival. He lives in Cleveland, Ohio.

"The author of Super Boys: The Amazing Adventures of Jerry Siegel and Joe Shuster—The Creators of Superman (2013) returns with the astonishing story of the first female U.S. district attorney...Rapid, compelling storytelling informed by rigorous research and enlivened by fecund imagination." —Kirkus Reviews (Starred)

"Ricca has parlayed an obscure reference to Mrs. Sherlock Holmes in his earlier research into a spellbinding true crime history that reads like a novel. It will be enjoyed by aficionados of Victorian crime novels as well as true crime fans."—Library Journal (Starred)

"Fans of Erik Larson’s books will enjoy reading about Grace Humiston’s remarkable career in an era when women were still fighting for the right to vote."—Booklist

"In Mrs. Sherlock Holmes, Brad Ricca paints the picture of Grace Humiston, a soft-spoken yet persistent woman investigator determined to solve the disappearance of an 18-year-old girl—this in the midst of both the suffragist and white-slavery movements. Where the police leave off, Humiston, undaunted by naysayers, picks up clues and doggedly follows them. Ricca lays out this fascinating whodunit with a novelist's skill, making Mrs. Sherlock Holmes a suspenseful winner." —Cathy Scott, award-winning journalist and Los Angeles Times bestselling author of Murder of a Mafia Daughter and The Killing of Tupac Shakur

"A fascinating account of Grace Humiston, a pioneering attorney in the early 20th century...Her incredible life story, superbly portrayed by Ricca, is more proof that truth is stranger than fiction." —Publisher's Weekly