Cannabis: The Illegalization of Weed in America (Hardcover) 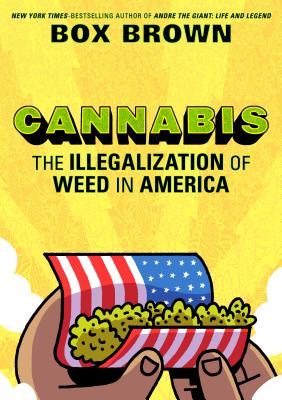 From the nineteenth century to the twenty-first, cannabis legislation in America and racism have been inextricably linked. In this searing nonfiction graphic novel, Box Brown sets his sights on this timely topic.

During the Spanish conquests Cortés introduced hemp farming as part of his violent colonial campaign. In secret, locals began cultivating the plant for consumption. It eventually made its way to the United States through the immigrant labor force where it was shared with black laborers. It doesn't take long for American lawmakers to decry cannabis as the vice of "inferior races."

Enter an era of propaganda designed to feed a moral panic about the dangers of a plant that had been used by humanity for thousands of years. Cannabis was given a schedule I classification, which it shared with drugs like heroin. This opened the door for a so-called “war on drugs” that disproportionately targeted young black men, leaving hundreds of thousands in prison, many for minor infractions. With its roots in "reefer madness" and misleading studies into the effects of cannabis, America’s complicated and racialized relationship with marijuana continues to this day.

In Cannabis, Box Brown delves deep into this troubling history and offers a rich, entertaining, and thoroughly researched graphic essay on the legacy of cannabis legislation in America.

“Box Brown has a knack for using comics to illuminate tricky subjects... [His] pared-down drawings provide the perfect support for stories freighted with layers of misinformation and irony.” —NPR

"This illuminating work by Brown (Is This Guy for Real?) examines the history of the outlawing of marijuana in the U.S. and finds the drug’s restriction is based on racism and falsehoods... This useful work will inform anyone curious about cannabis’s history in America."—Publishers Weekly

"Although disagreement about cannabis remains, this well-researched book takes an unflinching look at how racism and political agendas have influenced perceptions and policy." —School Library Journal

"Cannabis might be Brown’s most epic work to date, taking readers on a detailed journey through the history of marijuana and America’s legislation against it." —The Comics Journal

"In this illuminating work of graphic nonfiction, Brown provides a thoughtful look at the history, pharmacological affects, and legalization movement surrounding marijuana in North America." —TheMillions.com