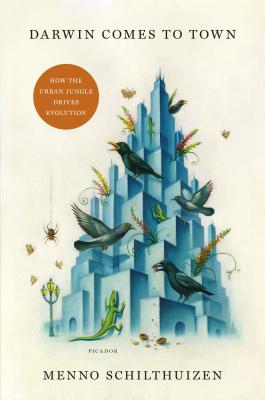 By Menno Schilthuizen
$27.00
Email or call for price.

Admittedly, I was first drawn to Schilthuizen's book by its beautiful cover. However, after just a few pages I found myself as much fascinated by the book's subject matter as I was with the cover. Schilthuizen hopes his readers will come away with an understanding that the rapidly expanding and multiplying urban centers around the world are as important to environmental studies as are forests, jungles, and deserts. After learning about all the ways in which various animals adapt to and, in fact, evolve in response to urban environments, I've become an ardent supporter of Schilthuizen's viewpoint. At times funny, gross, and shocking, this book will change how you look at nature.

*Carrion crows in the Japanese city of Sendai have learned to use passing traffic to crack nuts.

*Lizards in Puerto Rico are evolving feet that better grip surfaces like concrete.

*Europe’s urban blackbirds sing at a higher pitch than their rural cousins, to be heardover the din of traffic.

How is this happening?

Menno Schilthuizen is one of a growing number of “urban ecologists” studying how our manmade environments are accelerating and changing the evolution of the animals and plants around us. In Darwin Comes to Town, he takes us around the world for an up-close look at just how stunningly flexible and swift-moving natural selection can be.

With human populations growing, we’re having an increasing impact on global ecosystems, and nowhere do these impacts overlap as much as they do in cities. The urban environment is about as extreme as it gets, and the wild animals and plants that live side-by-side with us need to adapt to a whole suite of challenging conditions: they must manage in the city’s hotter climate (the “urban heat island”); they need to be able to live either in the semidesert of the tall, rocky, and cavernous structures we call buildings or in the pocket-like oases of city parks (which pose their own dangers, including smog and free-rangingdogs and cats); traffic causes continuous noise, a mist of fine dust particles, and barriers to movement for any animal that cannot fly or burrow; food sources are mainly human-derived. And yet, as Schilthuizen shows, the wildlife sharing these spaces with us is not just surviving, but evolving ways of thriving.

Darwin Comes toTown draws on eye-popping examples of adaptation to share a stunning vision of urban evolution in which humans and wildlife co-exist in a unique harmony. It reveals that evolution can happen far more rapidly than Darwin dreamed, while providing a glimmer of hope that our race toward over population might not take the rest of nature down with us.

MENNO SCHILTHUIZEN is a senior research scientist at Naturalis Biodiversity Center in the Netherlands and professor of evolutionary biology at Leiden University. He received his PhD from Leiden University in 1994, obtained two postdoctoral fellowships at Wageningen University, and then spent seven years in Malaysian Borneo as associate professor at the Institute for Tropical Biology and Conservation. His research revolves around evolution of biodiversity in insects and land snails and he has written more than 100 high-impact papers in the scientific literature on these and other subjects. Besides his scientific work, he is a prolific science popularizer who has written more than 250 stories, columns, and articles for publications including New Scientist, Time, and Science. A frequent guest on radio and television, he is the author of Frogs, Flies and Dandelions (Oxford University Press, 2001), The Loom of Life (Springer, 2008), and Nature’s Nether Regions (Viking, 2014).

“Natural selection is occurring all around us, and, as Darwin Comes to Town explains, increasingly because of us. Menno Schilthuizen introduces us to such rapidly-evolving creatures as urban lizards and city-dwelling mice. The result is a lively and fascinating book.”
—Elizabeth Kolbert, Pulitzer Prize-winning author of The Sixth Extinction

“Not only is evolution a real thing (something that, pathetically, one still needs to point out), and not only is it an ongoing process (rather than a phenomenon of the distant past), but some of the fastest, most interesting evolving occurs right under our noses, in our cities. In Darwin Comes to Town, Menno Schilthuizen explores the ways in which animals and plants have rapidly evolved to adapt to the opportunities and exigencies of urban niches. This is a fun, witty, thoroughly informative read.”
—Robert M. Sapolsky, New York Times bestselling author of Behave: The Biology of Humans at Our Best and Worst

“In a conversational style as appealing as it is informative, Schilthuizen...explores myriad ways in which plants and animals have adapted to modern urban environments....Schilthuizen is careful throughout to distinguish between true evolutionary changes and learned behaviors passed between individuals. He also does a superb job of introducing important ecological principles along the way, leaving readers with a fascinating question: ‘Can we harness the power of urban evolution to use it to make more livable cities for the future?’”
—-Publishers Weekly *STARRED REVIEW*

“In this delightful account...readers who assume that pigeons, cockroaches, and rats are the only representatives of city biology will learn that it is far more complex.... An expert romp through urban natural history.”
—Kirkus Reviews *STARRED REVIEW*

“Darwin Comes to Town is a brilliant reproach to all the biologists who believe that their true calling is to study the ‘vanishing quantity of unspoilt nature’ — the dwindling areas of forest and wilderness little touched by human activity — and who neglect the more exciting evolutionary change taking place in the towns and cities where most of them live.”
—Clive Cookson, Financial Times

“Schilthuizen is taking on three centuries of literature and polemic that defends the virtues of rural nature against the vices of city life.... This is a spellbinding and important book.... The message is thrilling.”
—Bryan Appleyard, The Sunday Times (UK)

“An entertaining look at how wildlife is rapidly adapting to urban habitats, offering fascinating examples from across the globe.”
—Frannie Jackson, Paste Magazine “The 25 Most Anticipated Books of 2018”

“While most of us are painfully aware of the negative effects that the heavy foot of progress has had on the natural world, especially in the part we call the built environment, nature refuses to go away. In fact, human activity has created a plethora of new opportunities for wildlife to survive and thrive in our presence. Darwin Comes to Town contains a wonderfully written, highly accessible collection of extraordinary examples, illustrating the breadth and depth of the concept of the ‘plasticity of adaptation’ that wildlife has demonstrated time and again, as we continue to reshape the natural world to our own requirements. It’s a great read and a real eye-opener for those who still wonder how white-tailed deer, raccoons, opossum, and a wealth of other ‘wild’ species of birds, mammals, and reptiles can carve out niches for themselves among the traffic jams and tall buildings of the modern metropolis and its suburbs.”
—Dr. Dickson Despommier, author of The Vertical Farm: Feeding the World in the 21st Century

“Darwin Comes to Town casts a radical new light on the way we should think about evolution: that it is not always a slow, lumbering process measured in millions of years, but, in fact, something that can take place at relative light speed under certain circumstances. Say, when it must adapt to the ecological pressures put on its habitat (a planet) dominated by human action, and, specifically, the frenzy of the urban landscape. Menno Schilthuizen makes an extraordinarily convincing and elegant argument that, inside the restless laboratory of the modern city, nature has already begun to adapt and engineer its own urban ecosystems. But, significantly, that it is up to us to embrace, harness, and enable these natural forces for the future.”
—Jay Kirk, author of Kingdom Under Glass

“Think our slick, hard-edged cities defy nature? In Darwin Comes to Town, the metropolis is just one more wilderness, where undeterred evolution fits ever-new forms to the cityscape, from toes to microbiomes to elaborate and beguiling new behaviors. The savage force and delicate subtlety of adaptation are engagingly unveiled in Menno Schilthuizen’s potent stories of evolution in the Anthropocene.”
—Dr. Richard Granger, Director of the Brain Engineering Lab at Dartmouth College