The Mayakovsky Tapes: A Novel (Hardcover) 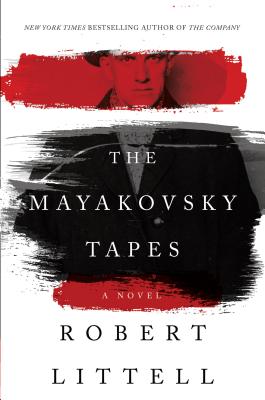 In 1953 four women meet at a deluxe Moscow hotel to talk about their relationships with a now dead paragon of the Soviet Union, the poet Mayakovsky. Their memories of him are conflicting but portray a complex man who went from idealist to a critic of the Stalinist era. Excellent. — Sarah Knight

In March 1953, four women meet in Room 408 of Moscow’s deluxe Hotel Metropol. They have gathered to reminisce about Vladimir Mayakovsky, the poet who in death had become a national idol of Soviet Russia. In life, however, he was a much more complicated figure.

The ladies, each of whom could claim to have been a muse to the poet, loved or loathed Mayakovsky in the course of his life, and as they piece together their conflicting memories of him, a portrait of the artist as a young idealist emerges. From his early years as a leader of the Futurist movement to his work as a propagandist for the Revolution and on to the censorship battles that turned him against the state (and, more ominously, the state against him), their recollections reveal Mayakovsky as a passionate, complex, sexually obsessed creature trapped in the epicenter of history, struggling to hold onto his ideals in the face of a revolution betrayed.

Written by Robert Littell, whom The Washington Post called “one of the most talented, most original voices in American fiction today, period,” The Mayakovsky Tapes is an ambitious, impressive novel that brings to life the tumultuous Stalinist era and the predicament of the artists ensnared in it.

ROBERT LITTELL is the author of more than a dozen novels and the nonfiction book If Israel Lost the War, written with Shimon Peres, President of Israel. He has been awarded both the Gold Dagger and the Los Angeles Times Book Prize for his fiction. His novel The Company was a New York Times bestseller and was adapted into a television miniseries. He lives in France.

"A vivid portrait of the life and times of Russian poet Vladimir Mayakovsky. ... Littell's mordant wit is perfectly suited to his melancholy tale, rich in dark imagery and razor-sharp dialogue." —Kirkus Reviews

"[A] vivid picture of a gifted poet, a tireless womanizer, and a man beset by wild mood swings. The ladies’ narration is both raunchy and often hilarious. It also illuminates a tumultuous period of Russian history." —Booklist

"Complex…rewarding… The Russian Revolution and its aftermath are viewed from varying angles, showing that truth is always contradictory and never simple." —Publishers Weekly

“Edgy conflicts with the state apparatus would explain why this book is called a thriller, but it will be so much more.” —Library Journal

“In this ambitious and tumultuous novel, Robert Littell signs a homage (to the poet Vladimir Mayakovsky) that is vibrant and sensual, where creative excesses existed alongside human genius.” —Lundi Library (France)

“Through the eyes of the four muses who loved and hated this tornado of love, sex, poetry and revolution, Littell... brushes an iconoclastic portrait of the poet who was crushed by Stalinism.” —Le Point (France)

"An eminence grise of the world of espionage, Robert Littell hides a romanesque soul. It surfaces in The Mayakovsky Tapes, a fictionalized biography of the Russian poet Vladimir Mayakovsky. With a kaleidoscope of emotions the flamboyant Lilya, the anti-Bolshevik Elly, the White Russian Tatiana, and the brazen diva Nora explore seventh heaven with their Don Quixote-like young idol." —24 Hours (Switzerland)

"Before shooting himself in the heart April 14, 1930, Vladimir Mayakovsky loved Lilia, Tatiana, Elly, Nora. In his latest book, Robert Littell reunites them twenty-three years after the poet's death. They confront their memories, detail their most intimate secrets with the young Bolshevik who committed suicide at age 36, tormented, torn between morality and commitment. Littell's obsessions resurface in the 282 pages of a book where emotion vies with intelligence and powerful writing." —Le Parisien

"Robert Littell gives us a delightful rereading of Mayakovsky’s biography - inventing, as a subtext, a war of the poet’s muses. He manages above all to explain the inexplicable: how someone endowed with such poetic power could end up killing himself." —Magazine Litteraire (France)

"The form of the book is particularly successful: a transcript of a conversation between four of the very sexual poet's former muses, exchanges that paint a picture of Mayakovsky's life, and through him of a Russia in full ebullition. The conversations sparkle with malice, jealousy, trenchant phrases, earthiness, bad faith, passion and love. A great way to explore Futurism, Vladimir Mayakovsky, his muses, the Russian Revolution, Pasternak also." —Garoupe (France)

"Robert Littell is not superficial. With few words and little fuss, Littell uses the weight of history to demonstrate the hopes that the Bolshevik Revolution was able to generate and all the horrors that it caused. Despite its historical purpose, the novel reads like a thriller and each page is turned with the impatience that proves the reader wants more." —Pieuvre Litterature (France)