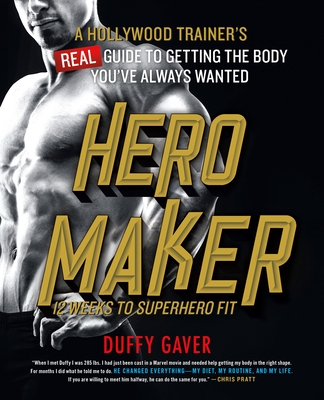 Former Marine sniper and ex-navy Seal, Duffy Gaver is the unsung hero of Hollywood. As a master trainer to the stars, he has transformed the bodies of actors such as Chris Hemsworth, Chris Pratt, Scarlett Johanson, Brad Pitt and many others. He is a Hero-Maker. He gets the most out of his clients by making them rethink their lives. For Duffy, the fitness industry sells a myth: it's all about the latest and greatest fads. Back in 1965, Larry Scott won the first Mr. Olympia. There was no Nike. No thermogenic products. No supplement industry. How did he do it then? With his will, his discipline, his desire. The things that big businesses can't manufacture. The first four minute mile, the first iron man triathlon, and the first world's strongest man all took place before 99% of today's companies even existed. What does this prove? None of this stuff is necessary.

Inside Hero Maker, Duffy Gaver shares the knowledge and motivational sit-downs that get his stars to take hold of their own bodies. None of these stars bought their way to their impressive physiques; they earned it with old fashioned work and dedication. He will tell you what you need to do to look super heroic, and he will show you how you too can do this if you put yourself to the task. Inside, you will also find some of his game-changing workouts to help get you there.

"When I met Duffy I was 285 lbs. I had just been cast in a Marvel movie and needed help getting my body in the right shape. For months I did what he told me to do. He changed everything—my diet, my routine, and my life. If you are willing to meet him half way, he can do the same for you." —Chris Pratt, Actor

"One of the most passionate, dedicated, and inspirational trainers I have worked with. A true warrior of the mind, body, and heart. He gives you wings to fly." —Pierce Brosnan OBE, Actor


"He's a good trainer and not a prick." —Brad Pitt, Actor

"Ain't nobody like the Duff! Makes every workout extremely interesting and efficient. Weights. Running. Swimming. Always more fun to mix it up. I love the Duff! My family loves the Duff. Most importantly, Zohan loves the Duff." —Adam Sandler, actor

"Duffy’s knowledge of health and fitness is undeniable. Though his workouts may be tough, he’s kind and insightful and helps you work on your body with a purity that doesn’t involve the extra nonsense of ego or vanity. I would highly recommend anyone who wants to learn about health and fitness to learn from a master like Duffy." —Emory Cohen, actor

"When I first got cast as Thor I was sent straight to Duffy as he was quickly becoming Marvels go to guy to get superhero fit and to this day I continue to implement his methods to maximize the opportunity to build the best version of myself. Not only a wealth of knowledge and experience in the space of health and fitness but one of my favorite people to be around. Genuine, honest and fully committed to the task at hand. Beyond appreciative for his no BS get it done attitude and down to earth way of motivating and keeping goals in perspective and most importantly making the experience enjoyable. A good old fashion true bloody legend!!" —Chris Hemsworth, Actor