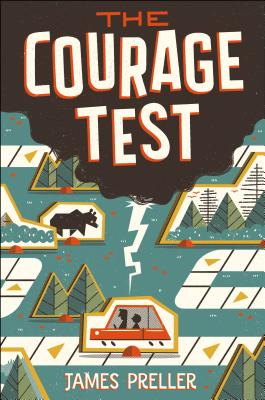 By James Preller
$16.99
Hard to Find - May no longer be available

This is my FAVORITE SUMMER 2017 READ for any middle schooler. It describes a boy's journey with his estranged father as they follow the Lewis and Clark trail by car, by boat, and by foot. Along the way, Will finds his own ways to be brave and learns shocking news about his mother. At times, Preller’s writing is poetic in order to capture a pre-teen’s emotional perceptions of his family and his own role in the world around him. Parents or guardians need not worry about any sensitive material. — Bonnie Winchester

Will has no choice. His father drags him along on a wilderness adventure in the footsteps of legendary explorers Lewis and Clark--whether he likes it or not. All the while, Will senses that something about this trip isn't quite right.

Along the journey, Will meets fascinating strangers and experiences new thrills, including mountain cliffs, whitewater rapids, and a heart-hammering bear encounter.

It is a journey into the soul of America's past, and the meaning of family in the future. In the end, Will must face his own, life-changing test of courage.

A father-and-son journey along the Lewis and Clark Trail--from Fort Mandan to the shining sea--offers readers a genre-bending blend of American history, thrilling action, and personal discovery.

James Preller is the author of the popular Jigsaw Jones mystery books, which have sold more than 10 million copies since 1998. He is also the author of Bystander, named a 2009 Junior Library Guild Selection, Six Innings, an ALA Notable Book, and Mighty Casey, his own twist on the classic poem, “Casey at the Bat.” In addition to writing full-time, Preller plays in a men’s hardball league and coaches Little League. He compares coaching kids to “trying to hold the attention of a herd of earthworms.” He lives in Delmar, New York with his wife, three children, cats and dog.

"Preller stirs doses of American history into a first-rate road trip that does traditional double-duty as plot device and coming-of-age metaphor. Will is initially baffled and furious at being abruptly forced to accompany his divorced father, a history professor, on a long journey retracing much of the trail of Lewis and Clark. ...Will survives a meeting with a bear and a spill into dangerous rapids—tests of courage that will help him weather the bad news that awaits him at home." --Booklist, starred review


"Whatever young explorers look for on their literary road trips, they’ll find it here."--Bulletin of the Center for Children's Books

"The lively narrative is interspersed with Will’s entries for a school writing assignment, which contain lots of facts about the original journey, as well as postcards to his mother. Despite the emotional heft, there is plenty of action, including white-water rafting and a close encounter with a bear. A middle grade winner to hand to fans of history, adventure, and family drama."--School Library Journal