Raising Men: Lessons Navy SEALs Learned from Their Training and Taught to Their Sons (Hardcover) 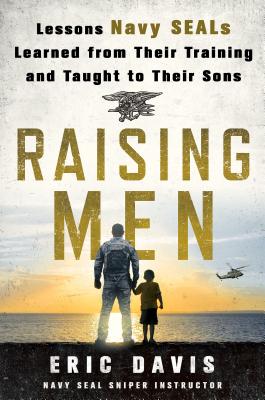 After Eric Davis spent over 16 years in the military, including a decade in the SEAL Teams, his family was more than used to his absence on deployments and secret missions that could obscure his whereabouts for months at a time.

Without a father figure in his own life since the age of fifteen, Eric was desperate to maintain the bonds he’d fought so hard to forge when his children were young—particularly with his son, Jason, because he knew how difficult it was to face the challenge of becoming a man on one’s own. Unfortunately, Eric learned the hard way that Quality Time doesn’t always show up in Quantity Time.

Facebook, television, phones, video games, school, jobs, friends—they all got in the way of a real, meaningful father-son relationship. It was time to take action.

As a SEAL, Eric learned to innovate and push boundaries, allowing him to function at levels beyond what was expected, comfortable, ordinary, and even imaginable, and he knew that as a father he needed to do the same with his son. Meeting extreme with extreme was the only answer.

Using a unique blend of discipline, leadership, adventure, and grace, Eric and his SEAL brothers will teach you how to connect, and reconnect, with your sons and learn how to raise real men—the Navy SEAL way.

ERIC DAVIS is a former U.S. Navy SEAL and decorated veteran of the Global War on Terror. Eric has been recognized as one of the premier sniper instructors in the U.S. military and has served as a Master Training Specialist at the SEAL sniper school in Coronado, CA. Eric began to master his writing in the SEAL teams by designing, writing, and producing numerous final training exercise scenarios.

Eric is now the founder and CEO of averagefrog.com, which repurposes the proven performance principles of the SEAL teams to help people to live a good life and lead others to do the same. He is also a featured writer on sofrep.com, navyseals.com, specialoperations.com, and The Loadout Room.

Eric lives in Orange County, CA, with his wife and is a dedicated and loving father to four wonderful and successful children. He is enthusiastic about being active with his children and converting those experiences into valuable life lessons that he wants to share with others through his book.

DINA SANTORELLI has been a freelance writer for over 15 years and has written frequently about entertainment and pop culture topics. Voted one of the Best Long Island Authors for 2013 (Long Island Press), Dina has collaborated on a variety of book projects, including Good Girls Don't Get Fat (Harlequin, 2010), The Brown Betty Cookbook (Houghton Mifflin Harcourt, 2012) and Bully (Weinstein, 2013), the companion book to the acclaimed documentary. Additionally, Dina's debut novel, Baby Grand, is a Top Rated Mystery & Thriller on Amazon Kindle. Dina currently serves as the Executive Editor of Salute and Family magazines.