Stars and Strikes: Baseball and America in the Bicentennial Summer of ‘76 (Paperback) | Northshire Bookstore
Skip to main content

Stars and Strikes: Baseball and America in the Bicentennial Summer of ‘76 (Paperback) 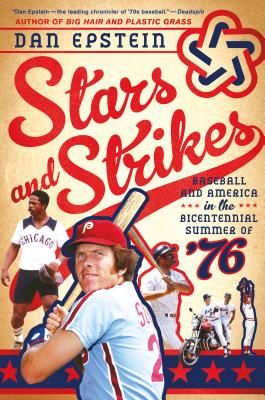 A Bicentennial baseball blast. While the diamond was studded with Mark "The Bird" Fidrych, the resurgent New York Yankees, and the mighty Big Red Machine, baseball experienced mammoth changes in 1976, most notably the beginning of free agency that paved the way for the millionaire player. — Mike Hare

Dan Epstein scored a cult hit with Big Hair and Plastic Grass: A Funky Ride Through Baseball and America in the Swinging '70s. Now he returns with a riotous look at the most pivotal season of the decade.

America, 1976: colorful, complex, and combustible. It was a year of Bicentennial celebrations and presidential primaries, of Olympic glory and busing riots, of "killer bees" hysteria and Pong fever. For both the nation and the national pastime, the year was revolutionary, indeed. On the diamond, Thurman Munson led the New York Yankees to their first World Series in a dozen years, but it was Joe Morgan and Cincinnati's "Big Red Machine" who cemented a dynasty with their second consecutive World Championship. Sluggers Mike Schmidt and Dave Kingman dominated the headlines, while rookie sensation Mark "The Bird" Fidrych started the All-Star Game opposite Randy "Junkman" Jones. The season was defined by the outrageous antics of team owners Bill Veeck, Ted Turner, George Steinbrenner, and Charlie Finley, as well as by several memorable bench-clearing brawls, and a batting title race that became just as contentious as the presidential race.

Meanwhile, as the nation erupted in a red-white-and-blue explosion saluting its two- hundredth year of independence, Major League Baseball players waged a war for their own liberties by demanding free agency. From the road to the White House to the shorts-wearing White Sox, Stars and Strikes tracks the tumultuous year after which the sport---and the nation---would never be the same.

DAN EPSTEIN is an award winning journalist, pop culture historian, and avid baseball fan who has written for Rolling Stone, SPIN, Men’s Journal, the Los Angeles Times, USA Today, MOJO, Guitar World, Revolver, LA Weekly and dozens of other publications. He is the author of the acclaimed Big Hair and Plastic Grass: A Funky Ride Through Baseball and America in the Swinging ‘70s. He currently resides in Los Angeles.

“A knuckleball ride through the wonderful and wacky year the nation celebrated its 200th birthday--and the national pastime changed forever… A must for everyone who still remembers when the White Sox wore shorts.” —Kirkus Reviews

“Epstein found so much fun stuff to talk about in the 1976 season while researching his book on baseball in the 1970s (Big Hair & Plastic Grass) that he carved out this breezily written chronological look back at a year and a season more complicated (teams nearly moved, free agency exploded, Hank Aaron retired, etc.) than even those who lived through it will recall.” —Milwaukee Journal Sentinel, Summer Reading Recommendations

“Dan Epstein's Stars and Strikes is an irreverent, swinging, tome with an attitude that bemuses and amuses. Carefully researched, written with all kinds of style, featuring the Big Red machine, the bird Mark Fidrych mighty Mike Schmidt, the "Junkman" (not Eddie Lopat but Randy Jones, owners Steinbrenner, George, Veeck, Bill, Turner, Ted and Finley, Charles, the work is a roller coaster ride of baseball and America in the Bicentennial summer of '76 as the book's sub-title proclaims.” —Harvey Frommer

“Baseball baby boomers will appreciate the nostalgia Epstein dishes out with some small helpings of contemporary pop culture; each chapter bears the title of a popular song. Never too serious and always fun, Stars and Strikes is what baseball--and all sports--should be about.” —Book Reporter

“It's clear that 1970s baseball is dear to Epstein's heart, as this book meshes baseball, politics, music and cultural trends into a very entertaining, readable book… Epstein's research is thorough and his writing is irreverent, funny and at times even as cheesy as the trends he describes. Stars and Strikes is a fine nostalgic trip, but it's also a solid read for the current generation of baseball fans.” —The Tampa Tribune

“I'll buy any book with Dan Epstein's name on the cover.” —Bill Morris, The Millions

“Dan Epstein's grand slam of a book catches how baseball changed – and changed everything -- in 1976.” —The Modern

“The year 1976 was one of epic change, on and off the baseball field. Dan Epstein reminds us why. He excels at blending 1970s pop culture and baseball into an informative, nostalgic, and, above all, fun read. Nobody does it better.” —Doug Wilson, author of Brooks

“At the heart of the book are the stars and events that made 1976 a year to remember…It's easy to see why 1976 captivates Epstein.” —Chicago Tribune Printers Row

“Dan Epstein captures the spirit of '76 in his new book, Stars and Strikes: Baseball and America in the Bicentennial Summer of '76. The book is the sequel to Epstein's 2010 '70s show, "Big Hair and Plastic Grass," in which each year of the polyester decade had its own chapter -- not nearly enough room to capture the on and off the field fireworks of the Bicentennial.” —NY Daily News

“Dan Epstein (Big Hair and Plastic Grass) contrives a baseball micro history in Stars and Strikes… [and] lend[s] itself to amusing narratives and bouts of nostalgia.” —The Daily Beast

“Dan Epstein gives this storied year the book it deserves in Stars and Strikes, detailing the characters, events, and cultural forces behind the Spirit of '76.” —Pasadena Now

“There is a trove of nuggets many of us either never knew or forgot...savor the good parts, which are plentiful.” —The New York Times

“Dan Epstein and baseball in the '70s go together like Kevin Costner and Susan Sarandon.” —Wall Street Journal

“What the 1960s were to America, the 1970s were to baseball, and Dan Epstein has finally given us the swinging book the '70s deserve.” —ESPN.com