Haatchi & Little B: The Inspiring True Story of One Boy and His Dog (Paperback) | Northshire Bookstore
Skip to main content

Haatchi & Little B: The Inspiring True Story of One Boy and His Dog (Paperback) 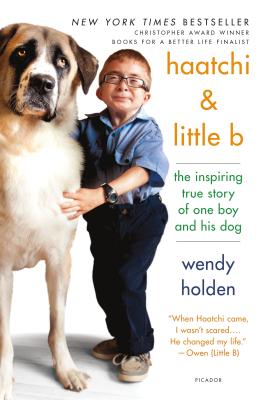 By Wendy Holden
$17.00
Hard to Find - May no longer be available

An initially heartbreaking but completely uplifting story of how a young boy with a rare genetic disorder and a dog who nearly lost his life when he was tied to active railroad tracks rally together and overcome the odds against them. Holden's research on both Little B's condition and the devastating statistics of animal cruelty are tastefully presented and include opportunities for readers to become involved in the organizations that help disabled humans and animals thrive. — Jess Hanlon

When Owen met Haatchi, the lives of one adorable little boy and one great, big dog were destined to change forever.

Owen-known to his family as "little buddy" or "Little B"-has a rare genetic disorder that leaves him largely confined to a wheelchair.
Haatchi-an adorable Anatolian Shepherd puppy-was abused and left for dead on railroad tracks. He was struck by an oncoming train, and although his life was saved, his leg and tail were partially severed.
But kind-hearted Will and Colleen Howkins, Little B's father and stepmother, decided to introduce the big dog and the little boy to each other, and an unbelievable bond was formed that transformed both boy and dog in miraculous ways.

WENDY HOLDEN’s first novel, The Sense of Paper, was published by Random House, New York, in 2006 to widespread critical acclaim. Other works have included the best-selling novelization of the award-winning films The Full Monty, plus Shell Shock - an investigation into PTSD from the First World War. She lives on a farm in Suffolk, England, with her husband and two dogs.

“We dare you not to fall in love with this unlikely pair.” —Rescue Me

“This beautiful book proves yet again that there is no greater force for good in the world than love.” —Brad Thor, New York Times bestselling author for Today.com

“Haatchi & Little B tells the poignant story of Owen, a disabled little boy who strikes up a friendship with a three-legged rescue dog.” —Parade (a must-read)

“Writer Wendy Holden tells the story of Haatchi and the boy nicknamed ‘Little B' with warmth and understanding.” —Daily Mail

“This is the inspiring story of the pair's subsequent bond, a bond which has touched the hearts of thousands of people.” —Basingstoke Gazette