The Shepherd's Life: Modern Dispatches from an Ancient Landscape (Paperback) 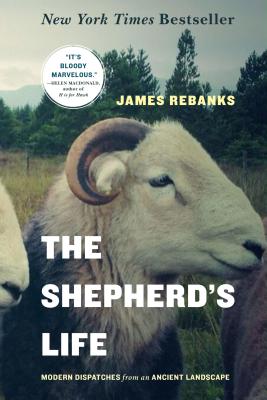 From birth James Rebanks knew what he was going to do, and where, for the rest of his life, and he is entirely happy with it. He is a shepherd in the Lake District, as was his father, and his grandfather before him, and he carries on their traditions and manages the same flocks, and treads the same paths that they did. I was filled with awe at the tremendous sense of place and belonging, that his writings exude. A beautiful testament to a dying way of life. — Becky Doherty

One of the Top Ten Books of 2015, Michiko Kakutani, The New York Times.

"Captivating... A book about continuity and roots and a sense of belonging in an age that's increasingly about mobility and self-invention. Hugely compelling." - Michiko Kakutani, The New York Times


Some people's lives are entirely their own creations. James Rebanks' isn't. The first son of a shepherd, who was the first son of a shepherd himself, his family have lived and worked in the Lake District of Northern England for generations, further back than recorded history. It's a part of the world known mainly for its romantic descriptions by Wordsworth and the much loved illustrated children's books of Beatrix Potter. But James' world is quite different. His way of life is ordered by the seasons and the work they demand. It hasn't changed for hundreds of years: sending the sheep to the fells in the summer and making the hay; the autumn fairs where the flocks are replenished; the grueling toil of winter when the sheep must be kept alive, and the light-headedness that comes with spring, as the lambs are born and the sheep get ready to return to the hills and valleys.

The Shepherd's Life the story of a deep-rooted attachment to place, modern dispatches from an ancient landscape that describe a way of life that is little noticed and yet has profoundly shaped the landscape over time. In evocative and lucid prose, James Rebanks takes us through a shepherd's year, offering a unique account of rural life and a fundamental connection with the land that most of us have lost. It is a story of working lives, the people around him, his childhood, his parents and grandparents, a people who exist and endure even as the culture - of the Lake District, and of farming - changes around them.

James Rebanks runs a family-owned farm in the Lake District in northern England. A graduate of Oxford University, James works as an expert advisor to UNESCO on sustainable tourism. The Shepherd's Life is his first book.

“Captivating... A book about continuity and roots and a sense of belonging in an age that's increasingly about mobility and self-invention. Hugely compelling” —Michiko Kakutani, The New York Times

““Rebanks’s family has farmed sheep in the hills of the lake District, in northwestern England, for some six centuries. The work, detailed lovingly in this memoir, has changed little… Rebanks is concerned with the survival of the landscape, of the life that it has fostered, and of its inhabitants’ view of the world.”” —The New Yorker

“James Rebanks's unsentimental, sharply detailed memoir about his life as a shepherd in England's Lake District gripped me from the first page.” —The Wall Street Journal

"James Rebanks’s “The Shepherd’s Life” stands in blissful earthbound contrast. Farming the high fells of the Lake District, the first son of a shepherd, who was himself the first son of a shepherd, Mr. Rebanks writes with loving eloquence about a kind of deep-rooted life that is all but lost in the developed world. Herdwick sheep, the local breed, are set free to graze on unfenced commons and could head off to Scotland were they not “hefted”—tied to their home range by invisible bonds of instinct and inheritance. Mr. Rebanks is himself hefted to his land and deftly conveys the worth and beauty of such a connection." - Geraldine Brooks

“A gorgeous book, unsentimental but exultant, vivid and profound, and a fierce defense of small-scale farming against the twin threats of agribusiness and tourism.” —National Geographic

“A powerful - and quietly electrifying - meditation on the gruelling truth of rural life... Rebanks' prose is beautifully sure-footed.” —The Sunday Times (UK)

“Rebanks' enthusiasm and talent for poetic writing is infectious... [His] words create not only a gorgeous landscape painting of the Lake District and its inhabitants, human, animal, bird and fish, but also a useful social document... What is most striking about this book is its authenticity; this is the real thing.” —The Times (UK)

“May well do for sheep what Helen Macdonald did for hawks.” —The Guardian (UK)

“Affectionate, evocative, illuminating. A story of survival - of a flock, a landscape and a disappearing way of life. I love this book” —Nigel Slater, author of the internationally bestselling Toast: The Story of a Boy’s Hunger and Tender

“Rebanks writes about his native Lake District with a loving eye for its past and present, its working denizens--humans, dogs, sheep--who continue to shape our picture of what Pastoralism is.” —Brad Kessler, author of Goat Song

“The Shepherd's Life weaves together the human history of the farmers with factual history of the farms, the spiritual pull of the land with the physical demands it makes, the cruelty and beauty, optimism and pragmatism of the most beautiful corner of the world. A vivid, honest, unforgettably written account not just of one shepherd's year, but of an ancient way of life.” —Lucy Dillon, author of LOST DOGS and LONELY HEARTS

“THE SHEPHERD'S LIFE is a reader's delight. Rebanks lives, breathes, and works his landscape - which gives him an inside edge as sharp as shears over most of the flock of current countryside writers. He has written a marvelous autobiography - of himself, his family, and the hills themselves.” —John Lewis-Stempel, author of MEADOWLAND and YOUNG JAMES HERRIOT: THE MAKING OF THE WORLD'S MOST FAMOUS VET