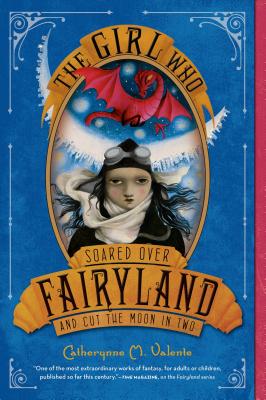 This is book number 3 in the Fairyland series.

"One of the most extraordinary works of fantasy, for adults or children, published so far this century." —Time magazine on the Fairyland series

September misses Fairyland and her friends Ell, the Wyverary, and the boy Saturday. She longs to leave the routines of home and embark on a new adventure. Little does she know that this time, she will be spirited away to the moon, reunited with her friends, and find herself faced with saving Fairyland from a moon-Yeti with great and mysterious powers.

The Girl Who Soared Over Fairyland and Cut the Moon in Two is another rich, beautifully told, wisely humorous, and passionately layered book from New York Times–bestselling author Catherynne M. Valente.

Catherynne M. Valente is the New York Times bestselling author of over two dozen works of fiction and poetry, including Palimpsest, the Orphan’s Tales series, Deathless, Radiance, and the crowdfunded phenomenon The Girl Who Circumnavigated Fairyland in a Ship of Her Own Making (and the four books that followed it). She is the winner of the Andre Norton, Tiptree, Sturgeon, Eugie Foster Memorial, Mythopoeic, Rhysling, Lambda, Locus, and Hugo awards, as well as the Prix Imaginales. Valente has also been a finalist for the Nebula and World Fantasy Awards. She lives on an island off the coast of Maine with a small but growing menagerie of beasts, some of which are human.

ANA JUAN is a world-renowned illustrator known in the United States for her wonderful covers for The New Yorker magazine, as well as the children's books The Night Eater, and Frida, written by Jonah Winter. She lives in Spain.

“Valente's Fairyland is terrible and beautiful--with a circus made out of stationery, a city populated with photographic negatives, and glimpses of Septembers and Saturdays past and future just a few of the strange wonders introduced in this volume.” —The Horn Book

“Like September, readers may leave their hearts in Fairyland.” —Kirkus Reviews, starred review

“As usual, Valente enlightens readers with pearly gleams of wisdom about honesty, identity, free will, and growing up. September often worries who she should be and what path she should follow, but the lovely truth, tenderly told, is that it's all up to her. Thanks to a dramatic cliffhanger ending, there is sure to be more empowerment and whimsy to come.” —Booklist, starred review