Jeeves and the Wedding Bells: An Homage to P.G. Wodehouse (Paperback) 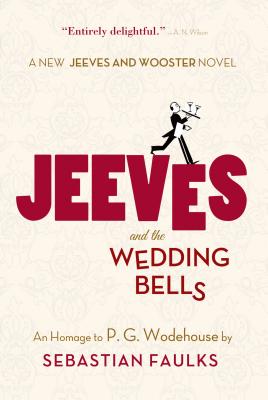 By Sebastian Faulks
Call or email to see if a used copy is available.
Out of Print

One B. Wooster, recently returned from a very pleasurable sojourn in Cannes, finds himself at the stately home of Sir Henry Hackwood in Dorset. Bertie is more than familiar with the country house set-up: he is a veteran of the cocktail hour and, thanks to Jeeves, his gentleman's personal gentleman, is never less than immaculately dressed.

On this occasion, however, it is Jeeves who is to be seen in the drawing room while Bertie finds himself below stairs—a role for which he has no discernable talent and a situation he doesn't much like. The root cause of this role reversal is love. Bertie, you see, has met one Georgiana Meadowes on the Côte d'Azur. However, Georgiana is spoken for. Orphaned at young age, she is the ward of the impoverished Sir Henry Hackwood. In order to help Sir Henry maintain his beloved Melbury Hall, Georgiana is engaged to marry a man of sufficient means, one Rupert Venables.

Meanwhile, Peregrine ‘Woody' Beeching, one of Bertie's oldest chums, is desperate to regain the trust of his fiancée Amelia, Sir Henry's tennis-mad daughter, and has approached Bertie—well, Jeeves, actually—for help.

But why would this necessitate Bertie having to pass himself off as a servant when he has never so much as made a cup of tea? Could it be that the ever loyal, Spinoza-loving Jeeves has something up his sleeve?

With the approval of the Wodehouse estate, acclaimed novelist Sebastian Faulks brings P.G. Wodehouse's most beloved characters back to life in a hilarious affair of mix-ups and mishaps, a brilliantly conceived, seamlessly executed novel worthy of the master himself.

Sebastian Faulks is the internationally bestselling author of 11 novels, including Charlotte Gray, which was made into a film starring Cate Blanchett, and the #1 international bestseller and classic Birdsong, which has sold more than 3 million copies and has been adapted for the stage, for television (starring Eddie Redmayne), and is now in development as a feature film. He lives in London.