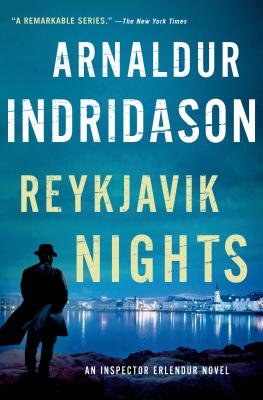 By Arnaldur Indridason, Victoria Cribb (Translated by)
$25.99
Email or call for price.

This is book number 10 in the An Inspector Erlendur Series series.

In this stunning prequel to his critically acclaimed Inspector Erlendur series, Arnaldur Indridason gives devoted fans a glimpse of Erlendur as a young, budding detective.

The beat on the streets in Reykjavik is busy: traffic accidents, theft, domestic violence, contraband … And an unexplained death.

When a tramp he met regularly on the night shift is found drowned in a ditch, no one seems to care. But his fate haunts Erlendur and drags him inexorably into the strange and dark underworld of the city.

The writer whose work The New York Times describes as "having the sweep and consequence of epic story telling" has outdone himself in this multi-layered and masterful suspense story. His latest book in the series, Strange Shores, was nominated for the 2014 Crime Writers of America Gold Dagger Award.

“In this riveting prequel set in late-1960s Reykjavík, Indridason plumbs the backstory of his series lead, somber Insp. Erlendur Sveinsson...The investigation slowly but surely gathers powerful, page-turning momentum. This installment stands on its own, but it's all the more impressive for giving new insight into Erlendur.” —Publishers Weekly (starred) on Reykjavik Nights

“Indridason has crafted a stellar prequel to his popular series, offering both insight into Erlendur's gloom and a glimpse of what he was like before the cloud settled in fully.” —Booklist

“Like his protagonist, Indridason is calm, methodical and unassuming. With Reykjavik's nights as a backdrop, what starts out as a modest tale of an unfortunate death develops into a deeply involving tale of chronic neglect, drug addiction, spousal abuse and the unsavory nature of fate.” —Chicago Tribune, Crime Fiction Roundup on Reykjavik Nights