Sylvia, Queen of the Headhunters: An Eccentric Englishwoman and Her Lost Kingdom (Hardcover) 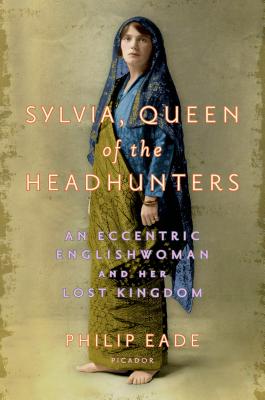 Unconventional, outspoken, outrageous, Sylvia Brooke (1885-1971) was known as the Ranee of Sarawak, married to the last White Rajah of the Borneo principality. Her charmed life among the British hereditary and cultural aristocracy reads like a zany novel - delightful! — Louise Jones

THE EXTRAORDINARY TALE OF SYLVIA BROOKE, THE LAST WHITE RULER OF THE JUNGLE KINGDOM OF BORNEO

Sylvia Brooke was one of the more exotic and outrageous figures of the twentieth century. Otherwise known as the Ranee of Sarawak, she was the wife of Sir Vyner Brooke, the last White Rajah, whose family had ruled the jungle kingdom of Sarawak on Borneo for three generations. They had their own flag, revenue, postage stamps, and money, as well as the power of life and death over their subjects—Malays, Chinese, and headhunting Dyak tribesmen. The regime of the White Rajahs was long romanticized, but by the 1930s, their power and prestige were crumbling. At the center of Sarawak's decadence was Sylvia, author of eleven books, mother to three daughters, an extravagantly dressed socialite whose behavior often offended and usually defied social convention. Sylvia did her best to manipulate the line of succession in favor of her daughters, but by 1946, Japan had invaded Sarawak, sending Sylvia and her husband into exile, ending one of the more unusual chapters of British colonial rule.

Philip Eade's Sylvia, Queen of the Headhunters is a fascinating look at the wild and debauched world of a woman desperate to maintain the last remains of power in an exotic and dying kingdom.

PHILIP EADE has worked as a criminal barrister, English teacher, and journalist. His first book, Sylvia Queen of the Headhunters, was a runner-up for the Biographers' Club Prize; his second, Prince Philip, became a Sunday Times bestseller. He lives in London.

“Philip Eade's exhaustive, penetrating study of this remarkable woman, Sylvia, Queen of the Headhunters, shows that her life did indeed resemble a fairy tale, even one by the Brothers Grimm…The details are reliably enthralling.” —The Wall Street Journal

“A courtier's daughter runs off to help rule an exotic, far-away kingdom--but it's not the next Game of Thrones novel. In fact, this story, chronicled by journalist Eade in his first book, is true. Born in 1885 in London, Sylvia marries Vyner Brooke--'the last white Raja' of Sarawak in 1911. (His family ruled the land for three generations). We get a picture that includes too much drinking, prostitutes, odd relatives and flying saucers. Plus an end to the British colonial way of life with Japan's invasion of Sarawak in 1941.” —New York Post

“This smashing biography--an updated American version of a 2007 British edition--transports readers to a not-so-stuffy Edwardian England and the far edges of the British Empire....Journalist Philip Eade does more than rescue Brooke from obscurity.” —The Christian Science Monitor

“[An] engaging account...Eade's book...may restore her to at least some of the renown that escaped her not long after her death. She may have been barmy, to use a word favored by that chronicler of English eccentricity P.G. Wodehouse, but barmy can be a lot of fun so long as it's in someone else's house.” —Jonathan Yardley, The Washington Post

“Suitably dishy...If there's anything that might have annoyed Rani Sylvia about Eade's rendition of her life, it's that one of the story's supporting characters may top her in sheer outrageousness.” —The New York Times Book Review

“British journalist Eade debuts with a well-written biography of Sylvia Brett Brooke....Vivid portraits of some fairly crazy Brits and a way of life that deserved to be doomed.” —Kirkus Reviews

“[A] dishy non-fiction bonbon...Sylvia is the sort of character we should be grateful to no longer have as a head of state, but even more grateful to have capture on the page, in all her bat-shit crazy glory.” —Passport

“For those intrigued by the peculiarities of the British Raj and the waning days of the empire, this makes fascinating reading.” —Booklist

“Biting biography...Draws on family archives to tell the full, jaw-dropping story of a family more than usually mischievous and dysfunctional.” —The Times (London)

“The kind of gift subject that a biographer must dream of...Colorful anecdotes of eccentricity, lunacy, and infidelity crowd every page.” —The Sunday Times (London), Books of the Year

“Philip Eade is eminently readable, with a detective's pertinacity at finding the clues to forgotten secrets and a raconteur's gift for sustaining his narrative interest....A rollicking good read.” —The Sunday Telegraph (London)

“[Eade] traces this tangled tale with diligence, humor, and an easy style.” —The Spectator (London)