Her: A Memoir (Paperback) 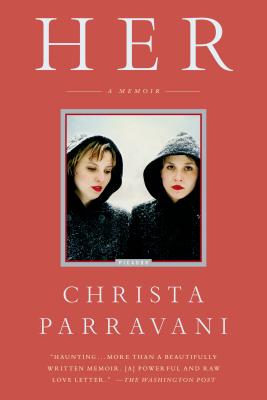 Christa Parravani spares no details as she illuminates the complex and intimate relationship shared with her twin sister Cara in this heart-wrenching memoir that brings the consequences of Cara's rape into stark unforgiving light. The reader becomes almost uncomfortably aware of how closely entwined Christa and Cara's identities were: they bordered co-dependency and blackmail as promises to each other came to fruition and fell apart. Furthermore, each twin gauged her self-worth based on the acceptance by the other, making the distinction between them nearly impossible.

An Irish twin myself, I found the Parravani twins' relationship frighteningly parallel to my own: we each tricked friends and family into thinking one sister is really the other, chose names for our children and we even decided who was going to die first and what the other would do to join them in the afterlife to lessen her pain. This, however, is where the similarities between the Parravanis and the Krawczyks end. Cara was brutally raped near her home; she was never able to fully recover and ultimately died of an overdose when she unsuccessfully tried to dull her pain. The Christa who survives her sister is broken, confused, angry and desperately try to become Cara through self-destruction. You don't need to be a twin to feel the power and loss in this memoir.

A BLAZINGLY PASSIONATE MEMOIR OF IDENTITY AND LOVE: WHEN A CHARISMATIC AND TROUBLED YOUNG WOMAN DIES TRAGICALLY, HER IDENTICAL TWIN MUST STRUGGLE TO SURVIVE

Christa Parravani and her identical twin, Cara, were linked by a bond that went beyond siblinghood, beyond sisterhood, beyond friendship. Raised up from poverty by a determined single mother, the gifted and beautiful twins were able to create a private haven of splendor and merriment between themselves and then earn their way to a prestigious college and to careers as artists (a photographer and a writer, respectively) and to young marriages. But, haunted by childhood experiences with father figures and further damaged by being raped as a young adult, Cara veered off the path to robust work and life and in to depression, drugs and a shocking early death.

A few years after Cara was gone, Christa read that when an identical twin dies, regardless of the cause, 50 percent of the time the surviving twin dies within two years; and this shocking statistic rang true to her. "Flip a coin," she thought," those were my chances of survival." First, Christa fought to stop her sister's downward spiral; suddenly, she was struggling to keep herself alive.
Beautifully written, mesmerizingly rich and true, Christa Parravani's account of being left, one half of a whole, and of her desperate, ultimately triumphant struggle for survival is informative, heart-wrenching and unforgettably beautiful.

Christa Parravani is the bestselling author of Her: A Memoir. She has taught at Dartmouth College, UMass Amherst, SUNY Purchase, and West Virginia University, where she served as an Assistant Professor of Creative Nonfiction. She earned her MFA in Visual Art from Columbia University and her MFA in Creative Writing from Rutgers-Newark. She now lives in Santa Monica, CA.

“Haunting...more than a beautifully written memoir. [A] powerful and raw love letter.” —The Washington Post

“Her instantly became my reading obsession....Parravani tackles her potentially melodramatic material with forthrightness and a flair for the darkly comic, while also remaining witchily true to the romantic uncanniness of twinhood. The tone she strikes is brashly ghoulish and heart twanging, the route through her past artfully circuitous. Her invites obsessional reader behavior because Parravani has the ability to make life, even at its worst, feel magic-tinged and vital and lived all the way down to the bone. She spins out of her dire experiences an enthralling story laced with weird luck and coincidences....The final sentence, honest to god, made me cry.” —Heidi Julavits, Bookforum

“Parravani succeeds in 'writing Cara back to life' and saving her own life in the process. No punches are pulled here, and Parravani's matter-of-fact tone does nothing to shield readers from the enormity of her loss....Imagine looking in a mirror and not seeing yourself. Imagine living the rest of your life with half of yourself missing. Imagine looking at your own corpse. You don't have to imagine: Parravani's story makes it all clear.” —Library Journal (Starred)

“Concise and captivating, Parravani's prose paints her phoenix-like transformation such that the reader feels the flames of her fire. A poignant, book-arcing metaphor illustrates Christa's battle to accept herself with a mirror-image. Raw and unstoppable, Her illuminates the triumph of the human spirit – both individual and shared.” —Booklist (Starred)

“Christa Parravani powerfully transforms her anguish over the traumatic death of her troubled identical sister into the astonishing Her.” —Vanity Fair

“Christa Parravani's new memoir, Her, is a glimpse into the most intimate chambers of the identical twin relationship...Her is a tribute to the truly beloved, as well as a celebration of the push-and-pull between sisters.” —The Oregonian

“Moving…just the right balance of joyous, melancholic and bitter. [We sometimes read memoir hoping] for a small glimpse into the inside of someone else's reality in all its messy glory. With humility and an unbreakable love and respect for her other half, Christa Parravani allows us that in droves.” —20somethingreads.com

“Full of headlong energy, Christa Parravani's HER is reckless yet delicate, familiar yet otherworldly, precise yet with the soul of a fairytale, and deeply moving in surprising ways.” —Nick Flynn, author of Another Bullshit Night in Suck City and The Ticking is the Bomb

“The best memoirs should come with a warning label, the kind that makes you take a deep breath before you open the cover. Her announces its challenges immediately while also establishing the voice that will pull you through the darkness of loss, memory and expiation. Suddenly bereft, twinless, distrusting the talent that has been her mainstay and questioning what it means to be a survivor, Christa Parravani carries us with her into the excavation of what it means to keep living, a lost twin and a woman digging herself out of her sister's loss. That she comes out the other side is never predictable--merely miraculous.” —Dorothy Allison, author of Bastard Out of Carolina

“Out of a maelstrom of love, loss, and grief comes this beautiful clear-eyed memoir, one that reveals the power and peril of twinhood even as it explores ideas that affect us all: Why are we drawn to what may destroy us? What makes us hurt the ones we love? And when we experience tragedy, how do we keep grief from eating us alive? With a photographer's sharp eye and a gifted writer's penetrating insight, Parravani writes about being torn apart and then about piecing her life back together, brilliantly illuminating along the way what it means to be a sister, a daughter, a wife, an artist, and--ultimately, and triumphantly--herself.” —Julie Orringer, author of The Invisible Bridge

“Christa Parravani's exploration of her relationship to her troubled identical twin sister is deeply thoughtful, lyrical, even magical. As she struggles for identity amid her sister's suffering, Parravani's own strength and talents emerge. There is rarely much redemption in losing the people we love, but Parravani transforms her pain into true beauty on the page.” —Kerry Cohen, author of Loose Girl: A Memoir of Promiscuity

“In this powerful memoir about the death of her identical twin and its impact on her own life, Christa Parravani explores what it means to be a woman of creative spirit as few writers have. I couldn't stop looking at the photograph on the cover, wondering what it would be like to be as close to another person as these sisters were to each other. An intense reading journey, an inspiring book.” —Julie Metz, author of The New York Times bestselling Perfection

“Christa Parravani's lyrical, no-nonsense Her ranks with the best American memoirs of the decade. This incandescent story of loving and losing one's twin is an uncompromising love poem to the joys and dangers of shared identity, and an unforgettable treatise on addiction, trauma, survival, and triumph.” —Jayne Anne Phillips, author of Lark and Termite and Machine Dreams

“Christa Parravani writes with extraordinary emotional honesty about being a twin and losing that beloved other self, and with equally remarkable candor about being an artist and about marriage, grief and much more. I have never read a book that so directly engaged the perils and exaltations of being a female. The scenes between the sisters in this book are breathtaking. And Christa's difficulty looking in the mirror after the death of her identical twin becomes the reader's desire to see him or herself, and the world, more sensitively. A fine and rare book.” —Alice Elliott Dark, author of In the Gloaming and Think of England

“The courage it must have taken Christa Parravani to write the memoir Her took my breath away. Not only did she confront, headfirst and with clear eyes, the story of her identical twin's brutal rape and subsequent death spiral, but she had to, in essence, swallow her twin in order to summon the exquisite writer lying dormant within herself. The result is both a gripping tale of horror and redemption and a brilliant study of dichotomies, as only an identical twin adept at toggling between brain hemispheres could convey: dark versus light, Thanatos versus Eros, good versus evil, love versus hate, and every shade of gray, red, and crazy in between. I unreservedly loved this book.” —Deborah Copaken Kogan, author of Shutterbabe and The Red Book