The Conflict: How Overzealous Motherhood Undermines the Status of Women (Paperback) 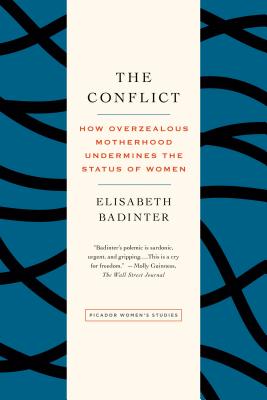 By Elisabeth Badinter
Call or email to see if a used copy is available.
Out of Print

Some have called Badinter "downright offensive." I, however, call her "necessarily blunt." Birthrates are plummeting across the globe, women and men are waiting until later in life to have children (if at all), and more mothers are rejecting the stay-at-home-mom model set by their mothers to pursue careers. These changes have not gone unnoticed by sociologists, yet the main cause remains a mystery. Badinter claims the main culprit is a return to naturalism, which rejects any model of motherhood that doesn't include on-demand breastfeeding, reusable diapers, organic foods, co-sleeping, or attending to the needs of their children 24 hours a day. This is a thorough, well-researched examination of the double-edged sword facing women today as they are pitted against each other in pursuit of the "ideal" mother figure. — Jess Hanlon

In the pathbreaking tradition of Backlash and The Time Bind, The Conflict, a #1 European bestseller, identifies a surprising setback to women's freedom: progressive modern motherhood

Elisabeth Badinter has for decades been in the vanguard of the European fight for women's equality. Now, in an explosive new book, she points her finger at a most unlikely force undermining the status of women: liberal motherhood, in thrall to all that is "natural." Attachment parenting, co-sleeping, baby-wearing, and especially breast-feeding—these hallmarks of contemporary motherhood have succeeded in tethering women to the home and family to an extent not seen since the 1950s. Badinter argues that the taboos now surrounding epidurals, formula, disposable diapers, cribs—and anything that distracts a mother's attention from her offspring—have turned childrearing into a singularly regressive force.
In sharp, engaging prose, Badinter names a reactionary shift that is intensely felt but has not been clearly articulated until now, a shift that America has pioneered. She reserves special ire for the orthodoxy of the La Leche League—an offshoot of conservative Evangelicalism—showing how on-demand breastfeeding, with all its limitations, curtails women's choices. Moreover, the pressure to provide children with 24/7 availability and empathy has produced a generation of overwhelmed and guilt-laden mothers—one cause of the West's alarming decline in birthrate.
A bestseller in Europe, The Conflict is a scathing indictment of a stealthy zealotry that cheats women of their full potential.

Elisabeth Badinter is the acclaimed author of three seminal works on feminism—The Myth of Motherhood, Wrong Turn, and Masculine Identity—which have been translated into fifteen languages. Badinter teaches philosophy at the école Polytechnique in Paris, where she lives.