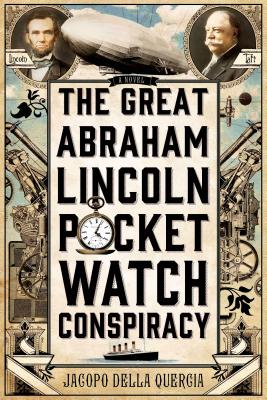 By Jacopo della Quercia
Call or email to see if a used copy is available.
Out of Print

This historical thriller is an equal-parts cocktail of action, adventure, science-fiction and comedy. The book follows a globe-trotting President Taft and Robert Todd Lincoln in a race to solve a mystery stretching back to the Civil War and the Lincoln assassination. Based on true events, readers will find themselves swept into a vast conspiracy spanning four continents and three oceans during the turn of the century. Fascinating technologies will be harnessed, dark secrets revealed, true villains exposed, and some of the most famous figures in history will take the stage. With surprises lurking around every corner, and a vast cast of characters to root for, Jacopo della Quercia's The Great Abraham Lincoln Pocket Watch Conspiracy is a heart-pounding adventure that only history could have made possible.

JACOPO DELLA QUERCIA is an educator and history writer who has authored more than 100 articles for the comedy website Cracked.com. His work has been featured in the New York Times bestseller You Might Be a Zombie and Other Bad News, BBC America, CNN Money, The Huffington Post, "The Takeaway" public radio program, Ripley’s Believe It Or Not!, Playboy’s The Smoking Jacket, CBS’s Man Cave Daily, Georgetown University professor John Brown’s Public Diplomacy Press and Blog Review, among others.

“Jacopo is an insight machine. His mind contains museums of fascinating history, and his writing never fails to change the way you look at the world around you.” —Jack O'Brien, Founder, Editor in Chief and General Manager of Cracked.com,

“Amazing…. skillfully weaves together one of the best reads of the year as he combines "real" history with his vivid and somewhat off-beat imagination. I know of no one else who has merged Martians, speeding blimps, comets, mysterious pocket watches, accurate historical references and international intrigue into one awesome and unique read! Believe it or Not!” —Tim O'Brien, VP Communications, Ripley's Believe It or Not!

“With the sweep and scope of a Jules Verne adventure, The Great Abraham Lincoln Pocket Watch Conspiracy not only charts its own fantastic course through a dizzying alternate history of the United States presidency—it takes on literary history itself, turning anachronism into action, politics into pop, and a handful of America’s Commanders-in-Chief into the stuff of potent yet poignantly humanized myth. If you think Honest Abe and his brethren have been resurrected to death (so to speak), think again; Jacopo della Quercia has brought the speculative presidential yarn to another level.” —Jason Heller, Hugo Award-Winning author of Taft 2012