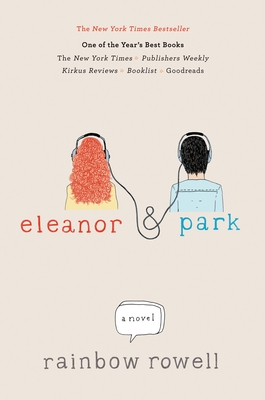 A tender story about two unusual teens-- a self-conscious girl from a poor family and a feminine Asian boy-- growing up in the 1980s and experiencing a first love that helps them through difficulties at school and at home. An altogether realistic portrayal of adolescence, this book is full of heart. — Paige Mushaw

It's evident that Eleanor doesn't fit in from the moment she steps on the school bus and while Park know it's social suicide to share his seat with her, he does anyway. This small gesture grows to sharing music, comic books, and kisses. Park is Eleanor's escape from her home, from the struggle that is living in a poor, abused family. Park's life isn't perfect, but seen through Eleanor's eyes, it's more than anyone could hope for. These realistic details rocket Rainbow Rowell's book from a beautiful story of love to one that considers heartbreaking realities; the result is stunning. Rainbow Rowell's novel will have readers sobbing as they press the book into their best friend's hands. Remember when we told you you'd love The Fault in Our Stars? This is what you need to read next. — Marika McCoola

If you loved The Fault in Our Stars by John Green, you'll swoon over Eleanor and Park, two star-crossed teens growing up in the 1980s. The lack of technology is refreshing because their relationship grows -- not through texts, tweets or Facebook posts -- as they trade comic books and mix tapes. Their "soundtrack" includes Joy Division, The Beatles, XTC, The Smiths, U2, The Cure, Billy Bragg and The Replacements. — Bonnie Winchester

“Eleanor doesn't have much going for her. Life with her mom and stepdad is minute-to-minute scary and the kids at her new school have singled her out for torment. Somehow into this reality comes Park, who is just trying to keep his head down and not make waves at home or school. These two misfits fall in love to a 1980s soundtrack. With humor and unflinching candor, Rowell propels readers through a story of first love and the courage it takes to keep going when all the odds are against you.”
— Julie Wilson, The Bookworm, Omaha, NE

Set over the course of one school year in 1986, this is the story of two star-crossed misfits-smart enough to know that first love almost never lasts, but brave and desperate enough to try. When Eleanor meets Park, you'll remember your own first love-and just how hard it pulled you under.

RAINBOW ROWELL lives in Omaha, Nebraska, with her family. She's the author of the Simon Snow Trilogy (Carry On, Wayward Son, Any Way the Wind Blows), Landline, Fangirl, Eleanor & Park, and Attachments.

“The pure, fear-laced, yet steadily maturing relationship Eleanor and Park develop is urgent and breathtaking and, of course, heartbreaking, too.” —Booklist (starred review)

“An honest, heart-wrenching portrayal of imperfect but unforgettable love.” —The Horn Book (winner of The Horn Book Award for fiction)

"Rowell’s humor, tenderness, and sense of detail are extraordinary." —Curtis Sittenfeld for The New Yorker

“Eleanor & Park is a breathless, achingly good read about love and outsiders.” —Stephanie Perkins, New York Times bestselling author of Anna and the French Kiss and Lola and the Boy Next Door

“Sweet, gritty, and affecting . . . Rainbow Rowell has written an unforgettable story about two misfits in love. This debut will find its way into your heart and stay there.” —Courtney Summers, author of This Is Not a Test and Cracked Up to Be

“In her rare and surprising exploration of young misfit love, Rowell shows us the beauty in the broken.” —Stewart Lewis, author of You Have Seven Messages

“Rowell's writing swings from profane to profound, but it's always real and always raw.” —Petra Mayer for NPR Books